Technology is neither good nor bad; nor is it neutral.

"My deep concern is that the new tech generations are having to face the age-old debate about decision-making through centralization V decentralization without necessarily understanding the stakes involved. Couple this with the fact that those stakes are rapidly changing as a result of the steady increase in global population and steady decline of the world's non-renewable resources.

There is a largely unmentioned battle going on between microeconomists and macroeconomists to describe and influence this worldview. It is now playing out in all facets of technology, including blockchain. Globalization (macro) was surely not a sustainable vision. The anti-globalization protectionist movement that we are witnessing has no elements of sustainability at all. (It is faux micro, at best.)

As we look to technology to help us deal with the world's increasing complexity and the prospects for enhancing sustainability, this technology needs to be fit for purpose -- not for the capitalist economy which is unsustainable because its source code is deeply rooted in geometric growth. In this area, I see a lot of circular reasoning through cyberationalisation which is often well-intentioned but rarely grasps the fullest meaning of the commons as a source of sustainability. This ought to be the standard that we aspire."

This is a place to monitor technological developments, the P2P infrastructure, software issues, technology-enabled cooperation, etc.. Eventually, this section should exhibit the answer to the following question: what are the technical requirements for human emancipation? How to we design and implement an infrastructure that guarantees the participation of all?

Above all, never forget: Technology Is Not a Force for Either Liberation or Oppression, as explained by Dale Carrico.

And please read this:

- "If we are to preserve the democratic and creative promise of the Internet, we must continuously diagnose control points as they emerge and devise mechanisms of recreating diversity of constraint and degrees of freedom in the network to work around these forms of reconcentrated power."

"The capacity to promote autonomy is a fundament characteristic of a convivial tool".

- Ivan Illich, in: "Tools for Conviviality"

See the graphic at http://pan.tilted.net/~admin168/wp-content/uploads/2010/03/newParadigm_graph2flat2.jpg 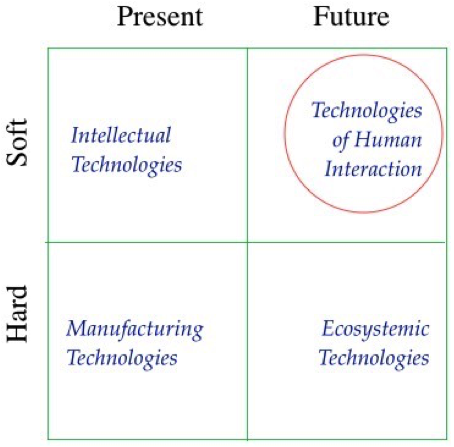 Towards a P2P Philosophy of Technology

"Notwithstanding his rather bleak diagnosis of contemporary society, Stiegler is not pessimistic with regard to the future. Whereas today’s capitalism is headed for destruction, it is precisely in the digitalized networks through which it tries to control the populations that a new kind of economy is emerging, one that is not only inventing new modes of production like open source and peer-to-peer, but that is also slowly creating a new economy of desire that could lead to the invention of new ways of life, new modes of individual and collective existence. A new society could arise on the same technological base that is now still predominantly destroying the social bonds. The digital networks might be the prime catalysts in the transformation from today’s consumer society into what he calls a ‘society of contribution’. In this context he talks in this interview about technologies in terms of pharmaka (a term derived from Plato and from his teacher Derrida) that can act both as a poison, destroying sociality and proletarianizing human existence, as well as a medicine, producing social ties and deproletarianzing human existence."

This typology by David Weinberger [8] is actually quite useful in determining basic attitudes towards the internet and technology:

3. Optimist (H) vs. Pessimist (P). Optimists believe that the Net is, or brings about, good things. Pessimists believe otherwise. (Note: Since everyone believes their beliefs are true, everyone thinks they are a realist. When someone actively asserts s/he is a realist, s/he is actually asserting a form of counter-optimism, i.e., pessimism.) (Note: The “H” stands for Happiness or Hope."

All P2P really means is person-to-person: normal folk using web tools - without the annoyance of an institution or mega-corp getting in the way.

"The most profound technologies are those that disappear. They weave themselves into the fabric of everyday life until they are indistinguishable from it"

One of the key elements of p2p is the end of the distinction between infrastructure and users. Under p2p the users BECOME the infrastructure.

"If we are to preserve the democratic and creative promise of the Internet, we must continuously diagnose control points as they emerge and devise mechanisms of recreating diversity of constraint and degrees of freedom in the network to work around these forms of reconcentrated power."

“Modern methods of production have given us the possibility of ease and security for all; we have chosen, instead, to have overwork for some and starvation for others. Hitherto we have continued to be as energetic as we were before there were machines; in this we have been foolish, but there is no reason to go on being foolish forever.”

A truly technological machine is an open one, and the ensemble of open machines presupposes man as permanent organiser, as living interpreter of machines both in themselves and in relation to other machines. Far from being overseer of a gang of slaves, man is the permanent organiser of a society of technical objects which need him as musicians need a conductor... So man's function is to become both coordinator and permanent inventor of the machines around him.

“I choose to see personal web‐server technology (Opera Unite, Firefox POW, etc) as a breakthrough technology, so people can put their own data into the cloud without paying Flickr or whomever. It is this sort of 'personal technology' I believe will characterize (what we now call) Web 3.0 (and not 3D, or semantic web, etc.). So my dilemma is that, while these technologies are pretty evident today, it is not clear that the people I suspect Pew counts as “the savviest innovators” are looking at them. So I pick “out of the blue” even though (I think) I can see them coming from a mile away.”

As I keep on insisting, time and time again, "technology" doesn't exist at a level of generality that properly enables one to affirm a "pro-technology" or "anti-technology" stance in any kind of monolithic way. Technology is better conceived not as an idol to affirm or as an ethos with which to identify but as an interminable process of collective technodevelopmental social struggle in which a diversity of stakeholders (not all of them necessarily even human) are constantly contesting, collaborating, educating, agitating, organizing, appropriating, and coping with ongoing and proximately emerging technoscientific changes, costs, risks, and benefits."

Huberto Maturana: Technology is not the Solution to Human Problems

“Technological transformations do not impress me, biological technology does not impress me, Internet does not impress me. I say this not out of arrogance. No doubt much of what we do will change if we adopt the different technological options at hand, but our actions will not change unless our emotioning changes. We live a culture centered in domination and submission, mistrust and control, dishonesty, commerce and greediness, appropriation and mutual manipulation ... and unless our emotioning changes all that will change in our lives will be the way in which we continue in wars, greediness, mistrust, dishonesty, and abuse of others and of nature. Indeed, we shall remain the same. Technology is not the solution for human problems because human problems belong to the emotional domain as they are conflicts in our relational living that arise when we have desires that lead to contradictory actions. It is the kind of human being, Homo sapiens amans, Homo sapiens aggressans, or Homo sapiens arrogans, at the moment in which we have access to a new technology, either as users or observers, that determines how we use it or what we see in it.”

Check out the mega-classic books on the topic by Lewis Mumford.

The following 4 files are in this category, out of 4 total.