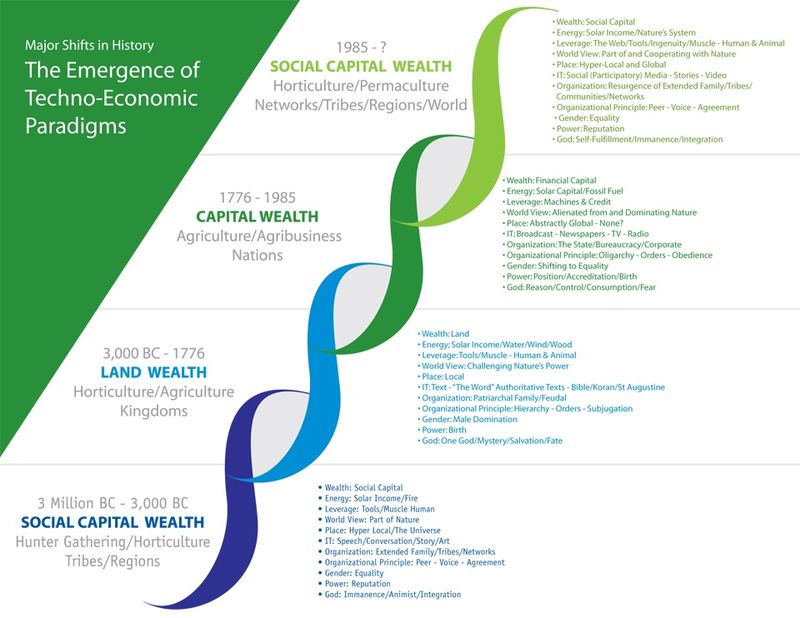 The lever is food

"You will see that it is our Food System that is the governer. How we get our food drives how we live, where we live and who has the power and it drives even what wealth itself is.

You will note also that how we communicate and how we use energy are also vital factors in the transitions. So for us Peak Oil and the Media revolution are harbingers of the next phase.

Please let me take you through it.

The key transitions are on the curves. Each transition is a food paradigm crisis. Each crisis is a time when the prevailing food system fails.

In our map I have tried to show the key development thresholds, when the new paradigm phase won through.

I picked 3,000 BC a key date marking the triumph of all the forces that created agriculture. It is not the date of the final victory of agriculture. But it is the date after which agriculture over our millions of years as a hunter gatherer was assured.

3,000 BC is the time when the early two kingdoms of Egypt combined and the first agricultural empire began. It marks the assured beginning of the new world of man dominating nature and each other. The time when, the “Book”, or written word, took over from “Experience” as the source of wisdom.

From now on there is no going back. From that date the Hunter Gatherer world was doomed. Land took over from social capital as the store of wealth and the lever of power.

I picked 1776 because this was the culmination of all the forces that came out of the Big Bang that was the Reformation. When man could talk to God directly. When a man’s works and not his birth showed that he was an elect. When thinking was allowed again. When the printing press empowered the revolt. This brought into being a new society that did not have a king and that was based on individualism and money rather than family, tribe or class.

This new world was embodied in the first ever non ethnic, non tribal, nation America. America was founded and shaped by the ideals of the Reformation. It’s shapers were refugees from the Monarchic, Aristocratic and Traditional Church Bound Old World.

Once America won independence, there was no going back. Monarchy was doomed everywhere. Money replaced land. The Individual replaced the family. The Nation replaced the Tribe. The law replaced the bible as the “Book”. The Church was removed from the State. Public success - “By their works shall ye know them” - replaced birth for the new power hierarchy. Money was the new measure of success. Money replaced salvation as the goal. This new mindset spread across the world.

1985 marks the advent of the web and of our understanding of a new science, Chaos Theory. From this I can see signs of a new order that will enable us to overthrow our food system that is based on dominating nature and people. I think that we are entering a period as revolutionary as the transition between Hunter Gatherers and Farmers.

For the only hope for us as a species and for our supporting planet is to learn how to work “With” Nature.

The web itself mimics how nature herself works. A network, it is bringing networks and tribes back into being. Our science is also now looking at how nature works. Chaos theory is in effect the Geometry of Nature. Evolutionary Biology is uncovering the forces that shape life. Our new tools no longer add power to our bodies but to our minds. Like the telescope that showed what could not be seen by the eye, so the computer has revealed complexity and the inner workings of nature. We can now know how she works in ways that were hidden to us before.

That though is all about the future to come. The bad news is that we are also living in the time of the greatest food crisis since the end of Hunter Gathering.

For 1985 also is the time of the advent of the final phase of agriculture. The Agribusiness Phase when the full power of Financial Capital and Oil was applied to growing food. When we used this power to crush nature. Where the result is a potential food crisis of epic proportions. Where a population of 7 billion depends on a system that itself is degrading the resources on which they all rely and where its core resource, cheap oil and plentiful water cannot last.

Ironically, we find ourselves where we found ourselves 15,000 years ago. Then too our use of our ingenuity had meant that we had become the dominant hunter whose success had lead to our spreading out across the entire planet. We had become the predator that was out of balance with the prey and we killed them all off.

We had to find a new way of getting our food. We have to do the same now. For the same reasons.

We used to live as part of Nature. The we learned to dominate her. Now we must learn to work with her. We have to make “return”. But in a new way. Now we can bring all our ingenuity to bear and understand nature in a deeper way than ever before.

If we are lucky, this “Return” will not be a collapse to an earlier time but a breakthrough to opportunities that are unimaginable.

But success is not certain.

There are no guarantees that we get there though. For it is not ordained that any individual or species will fulfill the full potential that is possible. But we know one thing. We know that if we focus on the new food system, we will have a chance.

The lever is food."