World History as a Thermodynamic Process and the coming of a Third Global World System]]. Peter Pogany.

Introduction by James Quilligan: Beyond State Capitalism: The Commons Economy in our Lifetimes. [4]

We need a scalable, networked form of social cohesion

"Crude forms of identity are emerging to provide social cohesion as national identity melts away. We need a scalable, networked form of social cohesion to replace those crude forms. That requires finding and reinforcing networks of consensus."

"His theory predicts that global society is drifting toward a new form of self-organization that will recognize limits to demographic-economic expansion – but only after we go through a new chaotic transition that will start sometime between now and the 2030s:

"History has recorded two distinct global systems thus far: “laissez faire/metal money,” which spanned most of the 19th century and lasted until the outbreak of World War I, and “mixed economy/weak multilateralism,” which began after 1945 and exists today. The period between the two systems, 1914-1945, was a chaotic transition. This evolutionary pulsation is well known to students of thermodynamics. It corresponds to the behavior of expanding and complexifying material systems.

The exhaustion of oil and other natural resources is pushing the world toward a third global system that may be called “two-level economy/strong multilateralism.” It will be impossible to get there without a new chaotic transition. No repeated warnings, academic advice, moral advocacy, inspired reforms, or political leadership can provide a shortcut around it. But if it took “1914-1945″ to make a relatively minor adjustment in the global order, what will it take to make a major one?”

"The conjuncture requires an analysis that comprehends not just at the World Trade Organization and the Zapatistas, but also Al Quaeda (not to mention all the Christian, Hindu, Judaic theocratic fundamentalisms).

Sketching in the ashes of a global war scenario, I propose a triangulation between three points:

a) The logic of neoliberal capitalism. I call this the logic of the World Market. It interpellates a planet of market subjects: consumers.

b) The logic of exclusionary ethno-nationalist-religious movements. I call this the logic of Fundamentalist Reaction. It addresses a planet lethally divided amongst chosen peoples.

c) The logic of collective creativity and welfare proposed by the counter-globalization movements. I call this the logic of Species Beings. It speaks to a planet of commoners. A whole series of molecular energies are currently being attracted, apportioned and annihilated between these three molar aggregates."

"Cosmo-Localization describes the dynamic potentials of the globally distributed knowledge commons in conjunction with emerging capacity for localized production of value. The imperative to create economically and ecologically resilient communities is driving initiatives for ‘re-localization’. Yet, such efforts for re-localization need to be put in the context of new technologies, national policy, transnational knowledge regimes and the wider global knowledge commons."

A.J. Toynbee on the role of Small Scale within Big Scale

“The present day global set of sovereign states is not capable of keeping peace, and it is not capable of saving the biosphere’s non-replaceable natural resources. What has been needed for the last 5,000 years, has become technologically feasible in the last 100, but not yet politically, is a global body politic composed of cells on the scale of the Neolithic-Age village community - a scale on which participants could be personally acquainted with each other, while each of them would also be a citizen of the world state.”

"Minqi Li's claim is that too many formerly peripheral countries -- especially the giants, India and China -- have moved into the position of what the world systems theorists call "semi-peripheral" countries, supplying mid-range or partially elaborated products to the central, high-technology producers. The result is a declining pool of people to exploit, both in terms of labor and resources, and in terms of defenseless markets that must necessarily buy products from the center. When large percentages of the world population have access to at least mid-level producer technology, capital can no longer accumulate at the former centers, whose power declines. The current state of affairs in Western Europe and the US/Canada seems to bear this thesis out.

In such a perspective, the p2p ideas and those of everyone working on p2p and commons approaches become far more pertinent. When the centers of capital accumulation can off the fruits of very high technology to all of those, across the world, who rise into the middle classes, then there is scant likelihood of winning them over to a cooperative approach -- the powers of capitalist seduction are just too strong. Yet in a condition of long-term stagnation, coupled with environmental threats stemming directly and visibly from capital accumulation, alternative proposals may become much more attractive across a flattening global hierarchy."

"No matter how promising the design of a new system might be, it would be unreasonable to expect that a nation would abruptly drop an existing system in favor of a new one. Nevertheless, a viable, even attractive strategy exists by which new systems could be successfully researched, developed, tested, and implemented. I call it engage global, test local, spread viral.

Engage global means to engage the global academic community and technical sector, in partnership with other segments of society, in a well-defined R&D program aimed at computer simulation and scientific field testing of new systems and benchmarking of results. In this way, the most profound insights of science can be brought into play.

Spread viral means that if a system shows clear benefits in one location (elimination of poverty, for example, more meaningful jobs, or less crime) it would likely spread horizontally, even virally, to other local areas. This approach would create a global network of communities and cities that cooperate in trade, education, the setup of new systems, and other matters. Over time, its impact on all segments of society would grow.

Cities, big and small, are the legs upon which all national systems rest. Already cities and their communities are hubs for innovation. With some further encouragement and support, and the right tools and programs, they could become more resilient and robust, and bigger heroes in the coming great transition." (https://medium.com/@JohnBoik/an-economy-of-meaning-or-bust-2aa46457b649#.1i09j8lv3)

"Were a world state to embrace the entire globe and humanity, then it would be no political entity and could only loosely be called a state. If, in fact, all humanity and the entire world were to become a unified entity . . . [and should] that interest group also want to become cultural, ideological, or otherwise more ambitious, and yet remain strictly nonpolitical, then it would be a neutral consumer or producer co- operative moving between the poles of ethics and economics. It would know neither state nor kingdom nor empire, neither republic nor monarchy, neither aristocracy nor democracy, neither protection nor obedience, and would altogether lose its political character."

The simple fact, then, is there can be no change to the existing OS (= operating system) without a transformation of the nation-state system. It must somehow be transformed from its present mode of destructive competition to a new mode of fruitful cooperation. In our globalized and highly interconnected world, there simply is no other alternative if we want things to change for the better. Yes, there may be minor changes and improvements that could be possible lower down the system at local, national or regional levels. But without a change of the OS at the global level, lower-level changes will always be hampered, undermined and ultimately prove futile. The pathology at the top of the system will always trickle its poison to the lower levels. Indeed, to think we could make our global economy just and sustainable without cooperative governance on the same global scale is just wishful thinking. Fortunately, the Simultaneous Policy (Simpol) campaign www.simpol.org offers a practical answer to the question of how to effect this transformation." (https://medium.com/@johnbunzl_93216/we-need-a-new-operating-system-the-gauntlet-has-been-laid-down-49689addc894)

Arran Gare on the Need for Strong Democracy

“The current form of the globalized economy has disempowered local communities and is characterized by massive concentrated power in a global ruling class of managers based in transnational corporations. These power relations are inimical to achieving sustainable development. What are now required are institutions that can re-embed markets in communities, making markets serve the ends of these communities rather than enslaving communities to the logic of disembedded markets, manipulated to serve the interests of these global power elites. A global economy is unavoidable, but it needs to be radically transformed and economic life re-localized as much as Possible.” (https://www.academia.edu/43252621/Toward_an_Ecological_Civilization_-_An_Interview_with_Arran_Gare?)

“Self-limitation requires institutions at higher levels to secure the endurance of agreed limits.”

“The setting of limits is then partly a problem of global, collective action: can we set up the higher-level international institutions that can control, say, carbon emissions or aggression or competition, and let nations and lower-level polities set up their own limits?” (https://docs.google.com/document/d/19EfFqpI6H-wDH379qG0tFkMpgTKphV5tVCUcYycyT3M/edit)

Robert Conan Ryan on the Fifth Magisterium of the Commons

"Neither science nor technology can provide the answers to the correct human limits and environmental limits One of my conclusions, in my historical analysis, is that we need a fifth Magisterium: the environmental magisterium, a set of institutions with special powers to balance the others.

We therefore need international organizations that can actually block environmental exploitation and manage resources with more independence from the other magistetia powers.

The other conclusion: strengthening the powers of the cultural commons to develop better ways of living for their own sake , rather than for the sake of business .

By strengthening the cultural commons and adding a true environmental Magisteria to our world system, we could solve many institutional problems that otherwise seem unsolvable."

On the Influence of Technology on Global Politics

Poor Richard: Framing the discussion in the contect of P2P-driven global governance

"Can a hollowed-out, privatized government to effectively cope with the increasing complexity of social and environmental crises such as global warming.

1. Establish powerful, confederated P2P Guilds and Leagues based on various global commons of knowledge and expertise so that mitigations, adaptations, and other interventions can be crowd-sourced by massively distributed, parallel, and open networks of peers.

2. Establish many strong, self-reliant economies at the local geopolitical (or Eco-political) level by forming partnerships between the P2P guilds and progressive local communities. These partnerships would maximize economies of scope via peer production and would also be strongly confederated with their peers bio-regionally, nationally, and globally.

3. One more maneuver that may be necessary to assist this process I will dub “castling”, a term borrowed from the game of chess. What I mean by this is a shifting of local populations between adjacent local geopolitical jurisdictions (such as cities and counties in the US) so as to create political, social, and economic majorities of p2p culture in the targeted locations.

The resulting strongly confederated p2p cultural strongholds might stand the best chance of competing with the large corporate entities, excluding them from the “castled” commons, and limiting the scope of their environmental destruction." (http://almanac2010.wordpress.com/2012/11/15/guilding-the-lilly/)

On the overall framework of a Commons and Civil Society oriented global policy and governance framework that insures sustainability:

Books by John Bunzl, the founder of Simpol, the International Simultaneous Policy Organization. 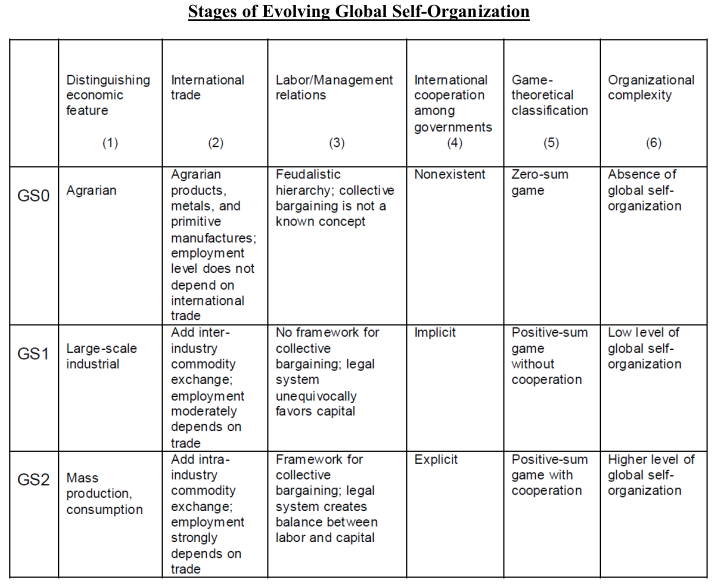 2. Characteristics of the third global epoch, according to Peter Pogany 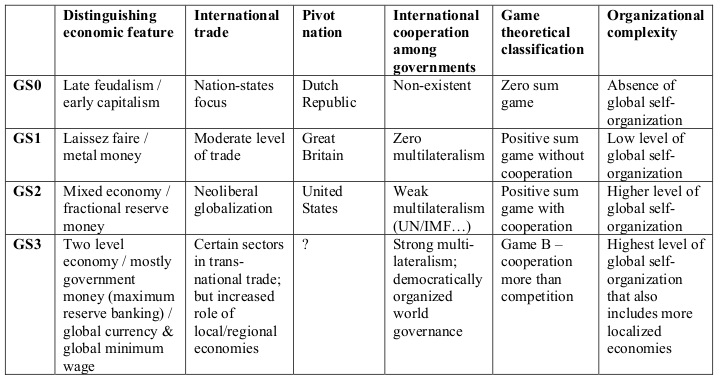