The foundational manuscript on P2P theory,uses the relational model used by anthropologist Alan Page Fiske, to conclude that the peer to peer relational dynamic is a form on 'non-reciprocal' or generalized exchange. In Fiske's model, it is called Communal Shareholding.

The implication is that Peer Production does not function as a Gift Economy (which corresponds to Fiske's category called Equality Matching), as is often mistakenly claimed. 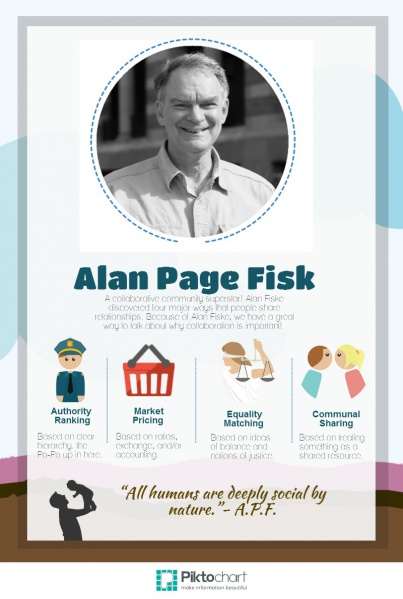 here's the background to the theory, reprinted from http://www.masternewmedia.org/news/2006/02/27/p2p_economic_potential_as_an.htm

"According to Fiske, there are four basic types of inter-subjective dynamics, valid across time and space, in his own words: "People use just four fundamental models for organizing most aspects of sociality most of the time in all cultures. These models are:

In Authority Ranking (AR) people have asymmetric positions in a linear hierarchy in which subordinates defer, respect, and (perhaps) obey, while superiors take precedence and take pastoral responsibility for subordinates. Examples are:

AR relationships are based on perceptions of legitimate asymmetries, not coercive power; they are not inherently exploitative (although they may involve power or cause harm).

In Equality Matching (EM) relationships people keep track of the balance or difference among participants and know what would be required to restore balance. Common manifestations are:

Every type of society or civilization is a mixture of these four modes, but it can plausibly be argued that one mode is always dominant and imprints the other subservient modes. Historically, the first dominant mode was kinship or lineage based reciprocity, the so-called tribal gift economies.

The key relational aspect was 'belonging'. Gifts created obligations and relations beyond the next of kin, creating a wider field of exchange. Agricultural or feudal-type societies were dominated by authority ranking, that is, they were based on allegiance. Finally, it is clear that the capitalist economy is dominated by market pricing. (http://www.masternewmedia.org/news/2006/02/27/p2p_economic_potential_as_an.htm)

- "One psychologist (Fiske, 1993) posits that all social relationships reduce to four forms of interaction: communal sharing, authority ranking, equality matching, and market pricing. People develop their capacities for social interaction in that order, from infancy through early childhood. The sharing, ranking, and pricing forms correspond to the tribal, hierarchical, and market forms, respectively. The equality-matching form, which is mainly about equal-status peer-group behavior, does not correspond to any single form; it has some attributes that fit under network form, but other attributes (e.g., reciprocity, feuding, revenge) fit better under the tribal form."

a deeper issue here is whether the tribal and the network forms are all that different. i think they are. and i'd like them to be so. i write several pages about this. but as i note, if it turns out that the new network form is an upgraded version of the old tribal form, then the timn framework should be converted into a three-form framework, and what will come next later in spiral fashion is an upgraded version of the hierarchical form."

" Although I’m not an expert on economic anthropology, I think it’s clear that it’s crucial to distinguish between two types of ‘tribal’ societies: First there are subsistence hunting and gathering societies, which have little or no stored surplus. Although it’s a big generalization, the dominant principle for production and exchange in these foraging communities is usually CS; they are often strongly anti-AR. Second, there are a few hunting and gathering societies with stored surpluses and there are agriculture-based socities, in which AR is prominent (institutionalized and more or less heridtary chiefs and then kings) and there are varying degrees of EM. In socities based predominantly on pastoralism, communities are much more fluid, but AR is also prominent. MP also very gradually emerges in agricultural societies, but pastoral societies are often resistent and opposed to MP. EM seems to become more dominant at a much later stage, with the rise of manufacturing, perhaps. Meanwhile, MP continues to expand right up to the present, but the mix gets complex!

The best overview of these stages (although it doesn’t use RMT) is Allen Johnson and Timothy Earle, 2000, The Evolution of Human Societies: From Foraging Group to Agrarian State, Second Edition. It’s not elegantly written or tightly reasoned, but I believe they’ve got the facts right." (email, January 2009)

"Fiske's schema seems modal to me, however, in that each aspect "transcends and includes" the former, in such a way that there are inevitably gains *and* losses.

Human cultural development, I think, recapitulates the above evolutionary development in the natural world, which—as a basic trajectory—was likely followed by modes in which the following blossomed:

As I was looking for correspondences to these, the two additional ways of organizing society I suggested were conspicuous to me by their absence—again, not as categories, but as modes of being / ways of meaningfully interacting, which "transcend and include" prior ways of acting."