Jobs, Liberty and the Bottom Line 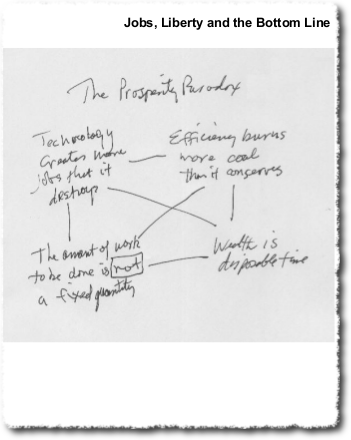 "The issue I grapple with in Jobs, Liberty and the Bottom Line is not so much "what is the best remedy for unemployment" or even "what is the case for shorter working time" but why and how has one particular set of policy options been excluded from the mainstream discourse. Of course that possibly translates into "why is the best remedy the forbidden one?"

Perhaps as much as or even more than problem solving, I am fascinated by the notion of taboo and its functioning as unwritten prohibition. How is the elusive ban transmitted and enforced in the absence of explicit instructions for such transmission and enforcement? The answer is through stock narratives that operate virtually as rituals, ignoring conflicting facts, inassimilable scientific theories and appalling outcomes.

With regard to working time, academic economics has fostered the notion of a self-adjusting, individual choice-driven natural order in which the given hours of work are presumed to be optimal and any interference will lead to a decline in welfare. There are only three or four problems with this tale of a miraculous automatism. The canonical income-leisure choice model upon which it is based has no pedigree in economic theory and has been refuted by the empirical data. The idea is inconsistent with the established and authoritative theory of the hours of labor, presented by S.J. Chapman over a hundred years ago. And the strange "lump of labor" fallacy claim – an alleged belief by shorter work time policy advocates in a "fixed amount of work," which is routinely invoked to disparage dissenters – was decisively refuted as itself a fallacy nearly a century ago.

One would think that with three strikes against it, the conventional wisdom hours of work and employment would be ripe for reconsideration. But, no, the impasse seems as formidable as ever, with calls for work time reduction relegated to the fringe of policy debate, even in the face of economic crisis, unacceptably high and persistent unemployment and the discrediting of formerly respectable economic myths about efficient markets and the "great moderation."

My approach to the issue of work time reduction and its taboo has led me down two tracks. One was recovering and documenting the body of economic thought suppressed by the fallacy claim and/or displaced by the textbook dogma that has grown up around income-leisure choice. The other was tracing the substance and history of the fallacy claim itself. That process has led me to a rather unexpected revelation of what the elusive "lump" in the fallacy claim actually stands for: the commons.

In retrospect, it seems simple. If dogmatic political economy is understood as striving to vindicate the rights of property, then the violence of primitive accumulation and enclosure of the commons can only stand as an embarrassment and impediment to that goal – one that must be shunned, evaded and denied. Investigating the taboo on "work sharing" also highlights something about traditional attitudes toward work as a communal activity that has been obscured by the now prevailing industrial-era innovation of wage labor.

Not only is it perfectly reasonable – and not fallacious – to think in terms of sharing the work, it was formerly ingrained and virtually unthinkable socially to do otherwise. This is not to say that the institutions for carrying out such sharing were necessarily ideal or equitable, or that those institutions should have survived the industrialization that finished them off. The lesson we can take from these archaic institutions, though, is that the individualized commodity form of wage labor is not the only or necessarily the best way of organizing and compensating work.

The labor commons that I propose in Jobs, Liberty and the Bottom Line is thus not an entirely new idea but is rooted in traditional practices and institutions such as the quilting bee, barn raising and medieval guilds. It is also foreshadowed in the contradictory nature of the modern division of labor and wage system itself, in that the determination of who does what and who gets paid how much is inevitably controversial and unstable. Early trade unionism, in sharp contrast to today's trade union bureaucracy, took much of its impetus from the much maligned commons view of work, which Samuel Gompers summed up in the phrase: "That so long as there is one man who seeks employment and cannot obtain it, the hours of labor are too long."

My innovation is to animate the labor commons through a new accounting technique – a method of social accounting that takes into explicit account the effects of work-time variation and distribution on social productivity. The calculations that need to be performed for this new social accounting for time are conceptually easy to explain but operationally complex enough to be feasible only with the advent of the personal computer and availability of spreadsheet programs. Moreover, the technology lends itself to a deliberative solution, rather than to the dictate of experts."

Based on excerpts from Tom Walker's book: