As reminded by Nicolas Hulot’s resignation from the French government, it’s difficult to combine liberal capitalism and ecology. Wouldn’t the commons represent the model for the future, post liberal capitalism, combining economic, social and environmental performance? Decoding attempt, based in particular on the example of Open Food Network.

The rank of the supporters of the commons continues to grow. Gael Giraud, director of the French Development Agency, has even made it one of the main priorities of AFD’s strategy. So how will the Commons overthrow liberal capitalism?

To answer this question, I propose here some lines of thought based on concrete examples from my own experience, but which would deserve to be supported by a more exhaustive analysis.

Let’s take the example of the open source Open Food Network (OFN) software. It is supported by a community of individuals around the world who collaborate on its development. The code is under open source license, AGPL, meaning that beyond this community, any other legal or physical person may use it and build on it, provided that these developments are also shared under the same license, thus creating a virtuous circle.

The OFN software aims to support food enterprises distributing through short food chains, in a non-prescriptive way, and thus, to allow these operators to spread, to gain efficiency in their management, to grow and reach the critical size that allows them to be sustainable, etc. Without enforcing a specific distribution model (CSA, “food assemblies”, buying groups, etc.) the software has a vision to be flexible enough to support all of them.

In terms of features, 90% of the needs of these actors are roughly the same, regardless of the operating model, and in all countries of the world. With this in mind, the idea of ​​commoners is to say: let’s develop together a management tool, and let’s share it! This means: division of the development cost by a large number of users of the feature.

What is the relevant level of mutualisation?

The Open Food Network project is organized according to a principle of subsidiarity: mutualisation and related decisions are made at the most appropriate level according to the nature of the common. 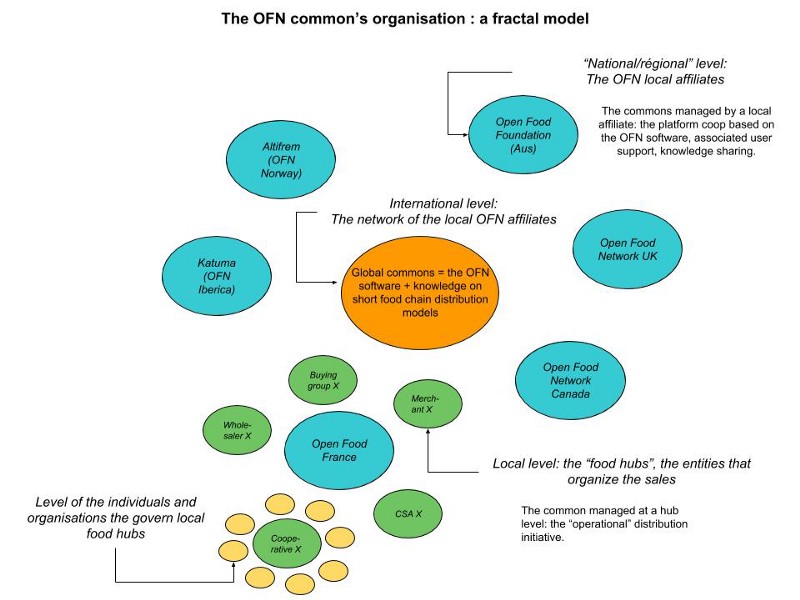 There are therefore in Open Food Network 3 “levels of common” governed by 3 communities:

This organization makes it possible to keep the governance of the resource “in common” at the apporpriate level, thus ensure the sovereignty of the users over the resource they depend on. It also enable to optimize the management and finance processes necessary for the preservation and the development of this resource.

A common could be defined as “a material or immaterial resource managed by a community that shares its use”.

Of course, it is not unusual for these commons to be “captured” by an actor who wants to take advantage of them, and to force the communities that depend on them to follow their own rules. Or simply, formatted by the capitalist system in which we are, educated through the culture of this system, we do not know how to do otherwise, what economic models to build other than those of liberal capitalism.

By sharing the governance of these commons among all the stakeholders of these communities, and by using facilitation methods that really make it possible to harvest the collective wisdom, there are no more left aside, no more imbalances in the sharing of value.

One example is Alterconso in Lyon (France), a cooperative made up of 50 producers, 800 families and 6 employees. They organize the distribution of 7 types of baskets (vegetables, meat, dairy products, bread, etc.) via 14 pick-up points in Lyon. With a social pricing system where those who earn little pay 0% commission, and those who earn more 20%. Where producers contribute via a commission of 12 to 17% according to the logistic service provided by the cooperative, therefore according to their “use of the common”. The employees, the producers, receive a fair salary for their work. Consumers have access to healthy, organic products, regardless of their income level. That’s the power of the common. The collective intelligence that invents a model taking into account the constraints of- and respecting each individual.

Let’s take an example: the case of short food chains logistics. Today, each buying group, each CSA, each “food assembly”, each local cooperative, will in the vast majority of cases organize its logistics on its own.

In many cases even, such as for CSAs or buying groups, each producer will have to go to the hub’s pick-up point. Way in: truck half full. Return: empty truck. The producer sometimes spends several hours on the road to deliver the pickup points, especially when they deliver to major cities, and sometimes spend a whole day doing deliveries. All this is not efficient, neither economically nor environmentally nor socially. With such logistics, it is also difficult for these short food chains models to “scale up” and become the dominant model.

So imagine: if we built, with all the actors of the short food chains distribution, a shared logistics service, using their data to build at every moment the most optimized routes taking into account all the actors of the ecosystem. No more silos! All these independent actors, spread geographically, could decide to use together their planned logistic data, using “big data” technics, to build a common logistics service. This vision is not just a dream, we have taken the first steps through the Data Food Consortium initiative.

More simply: buying together and sharing the use of a car, through the cooperative Citiz, means producing fewer cars and putting thus less pressure on resources. Buying together Fairphones via the Commown cooperative and renting them, thus ensuring their maximum repair and durability, means limiting environmental pressure. To join the more that 15,000 members of the cooperative Enercoop which organizes the distribution of 100% renewable electricity is to organize together the exit of nuclear power and coal.

The commons: a way to reconcile liberal capitalism and ecology?

The “commoners” are liberals. They defend freedom and individual initiative. But they are pragmatic liberals. They have understood that they must cooperate to organize efficient systems:

Do it together. Build a community. Commoners are the entrepreneurs who invent post-capitalism.

Commoners do not just disregard capitalism. They invent a new / post-capitalism, where the ownership of a company is no longer in the hands of investors seeking to maximize their return on investment, but in the hands of citizens wishing sovereignty over the systems they depend on and jointly funding this common. In this new capitalism, the return on investment is measured not only on financial performance (achieving financial balance), but also on social and environmental performance, as proposed for example by triple bottom line accounting. Depending on the type of commons, they can even abolish property and go beyond capitalism: some commons, global commons, belong to everyone, like the air for example.

Commoners believe in growth, but in growth of meaning. Not in unlimited economical growth, because this infinite growth disconnects users from the governance of systems.

So, wouldn’t the commons be the most promising model to replace the model of liberal capitalism, which leads humanity to its loss?