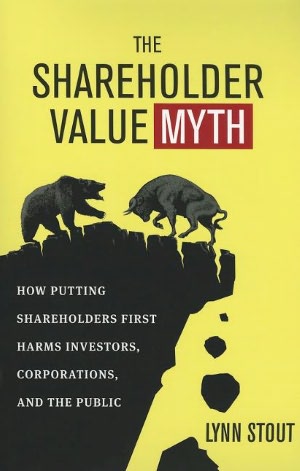 Executives, investors, and the business press routinely chant the mantra that corporations are required to “maximize shareholder value.” In this pathbreaking book, renowned corporate expert Lynn Stout debunks the myth that corporate law mandates shareholder primacy. Stout shows how shareholder value thinking endangers not only investors but the rest of us as well, leading managers to focus myopically on short-term earnings; discouraging investment and innovation; harming employees, customers, and communities; and causing companies to indulge in reckless, sociopathic, and irresponsible behaviors. And she looks at new models of corporate purpose that better serve the needs of investors, corporations, and society.'

"Stout’s book The Shareholder Value Myth looks at the pervasiveness of the "shareholder value" idea, and finds it has more basis in intellectual fashion than the law. She traces it back to an article by the economist Milton Friedman in 1970, which said that the social responsibility of companies is to increase profits, and to a highly influential 1976 paper that says shareholders are owners, and managers merely their agents.

In fact, says Stout, U.S. law doesn’t give shareholders any special consideration. And shareholders are not "owners," in the sense of, say, car or home owners.

The fact you own Apple shares doesn’t mean you can waltz into an Apple store and take an iPad.

"As a legal matter, corporations are legal persons that own themselves," she says. "The relationship between the shareholder and the firm is a contractual relationship, just as someone who works for Apple, or someone buying an Apple bond, enters into a contract. The fact you own Apple shares doesn’t mean you can waltz into an Apple store and take an iPad."

The question may seem arcane, but has big implications. Profit maximization leads to short-term thinking, often with nasty environmental and social impacts. Stout cites the example of BP’s decision to save $1 million a day by short-cutting safety procedures at its Gulf of Mexico rigs, and the eventual cost to shareholders of nearly $100 billion.

She says the "shareholder value dogma" also has the effect of turning everyday investors, who would normally support "pro-social" corporate behavior, into "functional psychopaths".

Practically, Stout wants to de-link executive pay and share-price performance, and to introduce a tax on share transfers to discourage short-term holdings. But more generally she wants us to reexamine entrenched notions about our market system.

"We need to stop teaching that shareholders own corporations, and that companies are well run when managers maximize shareholder value. Legally, it’s quite shockingly incorrect."