The Ladder of Participation = a typology that can be applied to the interplay of institutions (and corporations), with peer-based communities

General Context to the Ladder 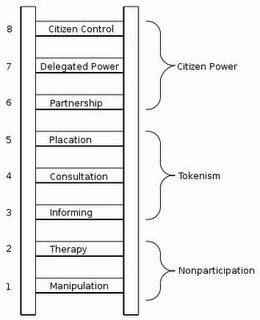 Graphic example of a ladder typology

Context: " Sociologist Roger Hart wrote a book called Children's Participation: The Theory And Practice Of Involving Young Citizens In Community Development And Environmental Care for UNICEF in 1997. This groundbreaking work put the work of young people and adult allies around the world in the context of a global movement for participation, offering needed guidance and criticism of many efforts. The "Ladder of Children's Participation," also called the "Ladder of Youth Participation," is one of many significant tools from the book." (http://www.freechild.org/ladder.htm)

The different levels are described here:

""The bottom rungs of the ladder are (1) Manipulation and (2) Therapy. These two rungs describe levels of "non-participation" that have been contrived by some to substitute for genuine participation. Their real objective is not to enable people to participate in planning or conducting programs, but to enable powerholders to 'educate' or 'cure' the participants. Rungs 3 and 4 progress to levels of 'tokenism' that allow the have-nots to hear and to have a voice: (3) Informing and (4) Consultation. When they are proffered by powerholders as the total extent of participation, citizens may indeed hear and be heard. But under these conditions they lack the power to insure that their views will be heeded by the powerful. When participation is restricted to these levels, there is no follow-through, no 'muscle,' hence no assurance of changing the status quo. Rung (5) Placation is simply a higher level tokenism because the ground rules allow have-nots to advise, but retain for the powerholders the continued right to decide.

Further up the ladder are levels of citizen power with increasing degrees of decision-making clout. Citizens can enter into a (6) Partnership that enables them to negotiate and engage in trade-offs with traditional power holders. At the topmost rungs, (7) Delegated Power and (8) Citizen Control, have-not citizens obtain the majority of decision-making seats, or full managerial power." (http://www.comminit.com/planningmodels/pmodels/planningmodels-129.html)

Adapted to the community vs. institution situation.

The Ladder of Participation in the Peer Economy

One of the domains of non-monetary valuation has been called the Adventure Economy Joe Edelman and Guaka who envisioned CouchSurfing hospitality exchange network as a potential starting point for a platform for broader forms of exchange:

"We coin the term adventure economy to refer to a gift economy that is pay-forward, in-person, global and among strangers. In any economy, there are challenges in allocating resources effectively and avoiding abuse, but these are of special concern in non-market economies among strangers, where we don't have the information mechanisms of the price system nor of social relations, and we are also missing the risk-reduction mechanisms of contracts ."

These are the folks who are going to be at the website almost everyday. There membership in this community represents a key part of their life/practice and they are going to be very familiar with the interface, even if you’re using hieroglyphs for navigation. Most communities will have 2-20 of these… depending on size. This graph gives a real nice sense of how this looks.

This is the critical middle ground in any community. These are the folks who are very familiar with the community but don’t necessarily come to it everyday and might leave for months and come back. They don’t perform any ‘critical’ functions individually in any given community, but as a whole, they are essential. They keep core members from wondering off track. They supply alot of workload as a whole. They are also key to the spreading of that community. My own membership in the moodle community would be a good example of this. I participate in discussions occasionally, and have posted some 50 or 60 times on the website, but will be absent for months at a time.

We have alot of these people over at edtechtalk. They are folks who actually take the time to register on the website but don’t usually participate in the discussions or post of the website. They are, I would guess, the vast majority of people in an online community. They listen, read the results of work done in a community, and are often the ‘audience’ for that community. A good way of thinking about this might be someone who reads a blog but never responds to the ideas there either in comments or by blogging about the content elsewhere. It is critical in a collaborative community to know whether or not you are interested in servicing this community.

These are people who are seeking a particular service from a community. These might be information seekers from a tech forum or people downloading software from an open source software community.

These are people who might have a vested interest in a given piece of content, but may not wish to join a community (for any number of reasons). These people could be reporters, researchers with related interests etc… They could also be the funders of a given project who are stopping by to see how things are going. This is always critical. Many communities that are actually successful can fall on hard times because those people who might be interested in supporting it don’t ’see’ the success of the community when they come and visit.