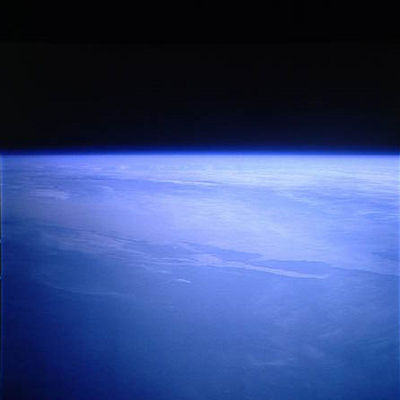 A bit of farsightedness is sometimes needed.

Now we have seen the many advantages the networked information economy has over the industrialized information economy in both economics as well as potential in providing for a society more free and more just. However, the necessary developments in technology won't lead automatically to the utilization of the enabled potentials. Whether this is the case or not depends on a number of factors, most significantly on the social practices in a given society (will people share and collaborate under these circumstances?) and the political actions taken by legislature (are those practices legal and are they favoured or hindered?).

In fact, we are seeing strong opposition to the concepts of the networked information society, originating either from poor understanding and the firm believe in exclusive rights on information, or from fear for last-century business models. This has led to strong lobbying and tilted the institutional ecology of the digital environment in favour of the industrial instead of the networked information economy. The current extremism held by most legislatives is resulting in ever stronger 'intellectual property' laws and established industries, like Hollywood and the recording industry which hold a huge part of our culture of the 20th century, are hoarding information and try to prevent people from sharing. We are at a critical time and the decisions we are facing today will greatly influence the availability of basic resources for information production and exchange now and in the future.

For the networked information society to work, two things are needed to supplement human creativity: existing information and tools to create and share more information.

The tools necessary are firstly general-purpose computers over which the users have full control and can make whatever use of they want, and secondly a neutral network over which people can freely exchange whatever information they want. At the moment, both of these are available in form of personal computers and the internet. However, there are a number of threats to this. 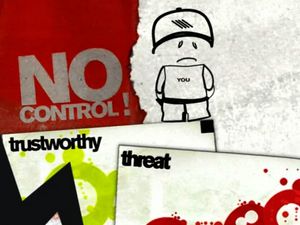 Frame out of the animated short film trusted computing.

The general-purpose computer is in danger by a technology dubbed Trusted Computing which more accurately is called Treacherous Computing. It is a technology implemented in both hardware and software that would give the responsible companies full control over your computer.[1] As those companies don't trust you, they build a combination of hard- and software they can trust (hence the term), relying on a TPM-chip in the computer that makes it uniquely identifiable. A nearly unbreakable DRM system is imaginable where data like music or personal information could be encrypted in a way that only the exact same combination of software (like iTunes) and hardware (your computer) would be able to decrypt it again. Copying of DRM-ed music would be rendered impossible and your computer could even refuse to allow not-certified software to be run. The only way to be sure what your computer is exactly doing is to run free and open source software whose workings are laid open and even this might be prevented with Trusted Computing on hardware-level. Also mobile phones that are operator-controlled deny the user access to the full capabilities of the phone.

At the moment, a rich ecosystem of free and open source software guarantees that everybody has the tools to use his computer for lots of different purposes. The internet is built on open standards that non-profit organizations like the World Wide Web Consortium (W3C) or the Internet Engineering Task Force are developing. But proprietary software and especially proprietary file formats are counteracting the networked information society. Whereas open standards can be used and implemented by anyone without need for licensing, data saved in proprietary file formats can only be thoroughly retrieved with the same or a licensed program because only the vendor knows how the data is stored exactly. This leads to vendor lock-in and prevents interoperability. Microsoft has used its monopoly extensively and tries to lock consumers for example into its proprietary Word program or by implementing internet standards incorrectly, pressing website developers to create websites that would display wrongly in other browsers than Microsoft's market dominating Internet Explorer.[2]

On the network side, a neutral network is needed where all information flowing is treated equally. The biggest threat to this are currently ISPs (Internet Service Providers) that might want to control the last mile, the network connection from a communications provider to the customer (you). They might choose to prioritize some data packages or block certain services (like peer-to-peer file-sharing systems or the website of a competitor) entirely. Internet censorship is already widely practiced in countries like China. Initiatives against this threat are municipal broadband and the development of open wireless networks. The technology is there to build devices like computers and mobile phones that have wireless ad-hoc networking capabilities. Then every device would forward data from other devices, carrying each others data flows and self-configuring into a high-speed wireless network. This way consumers could build their own last mile. Unfortunately, telecommunications service providers might not want this to happen but keep a monopoly on the last mile and refuse to sell such devices or even boycott manufacturers that produce such equipment. 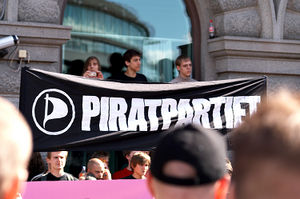 A rally of the Pirate Party.

For a networked culture to thrive, access to existing information is crucial. Sadly we are seeing policy makers in favour of exclusive rights and copyright terms for example are just going up and up. On the other hand, there exists an increased sharing practice on the internet and people all over the world start to realize the importance of the issues outlined in this text. The initiatives of free culture and open source are building alternative systems to the exclusive rights based one. At the same time, there are also efforts in persuading politicians on reforms and in Sweden the first political Pirate Party was founded, promoting intellectual property reforms and strengthening of the right to privacy.

In the domain of scientific publication, researchers and scholars used to submit their papers exclusively to acknowledged journals such as Nature or Science in order to gain reputation promoting their career. Usually they then have to pay for submission and have to reassign the copyright of the text to the journal, the text then gets peer reviewed by other experts of the field. This way the research is locked in and to get again access to the information and ongoing research of others, universities have to pay incredibly high subscription fees for the journals which especially institutes in the developing world simply can't afford. Taking the internet into the picture, the concept of open access has emerged.[3] The information is published on the internet and released as free content (chapter 2.4) so everybody has unrestricted access and can profit from existing research. At the moment there are two slightly differing models of open access (OA): OA self-archiving where authors still publish their work in traditional journals but additionally are allowed to make it freely accessible on the internet, sometimes with a delay or only the not peer reviewed version, and OA publishing where authors submit their work to open access journals where it is freely and immediately accessible.[4] As most of our basic research is taxpayer-funded it is only honest that the outcome should be publicly accessible and some government institutions are starting to mandate open access publishing of the research they finance. Different open access publishers have different financing models. Non-profits like the Public Library of Science (PLoS) apply peer review and demand a submission fee of the authors, while for example the also non-profit arXiv is a highly automated archive and its contents are not peer reviewed but publication is free in turn. The arXiv is already broadly accepted in the fields of mathematics and physics and most of the research in these fields is published there. There are also for-profit open access publishers like the BioMed Central that publish the papers also as free content and have diverse revenue streams.

BiOS logo. Also in the field of agriculture and medicine open approaches are explored.

In the fields of agricultural biotechnology and medicine, which are especially important for the people in economically less developed countries, most information is still handled as property. Research for example on different crops resulting in higher yields in agriculture and increasingly research in genetically modified plants is property held by a few companies or even universities and scientist in poorer countries have no chance to further innovate or adapt these technologies more precisely to their local climate. HIV/AIDS drugs are sold at very high prices that millions of people in the poorer parts of the world simply can't pay for and die because the companies holding the patents prevent competitors from producing cheap generics. On the other hand, teenagers in the industrialized world get ever finer acne products while there is still no malaria vaccine - not because nobody would need it, but because nobody could pay for it. Nonprofit research and the pooling of information and research results as a commons would lead to more innovation and access to core technologies would enable people in the economically less developed countries to help themselves. In agriculture, initiatives like BiOS (Biological Innovation for Open Society/Biological Open Source) of the international non-profit institute CAMBIA or the formation of the CGIAR (Consultative Group on International Agricultural Research) are a start while in the health sector and in the development of drugs and medicine still only Big Pharma business is dominating and only the Institute for OneWorld Health is worth mentioning. 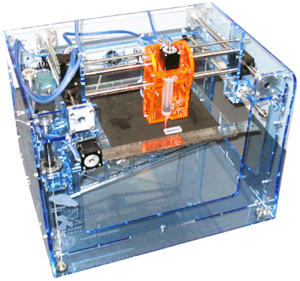 An assembled fabber of the [email protected] project.

While the core of these mechanisms of collaboration and sharing is information, the value of many physical products lies increasingly in the information they contain rather than the material. A drug may be just one small pill, a computer just a bunch of silicon, but nonetheless the information that lies behind the production of these objects is immense and makes them powerful. The free/open design movement, which is still in its infancy, aims to collaborate on the design of physical objects which is facilitated for example by the modeling of virtual 3D objects on the computer and other CAD software.[5] Also the design of computer hardware itself is starting to be peer produced.[6] If 3D printers or fabbers (digital fabricators) that can make 3D objects described by digital data become one day as cheap as ordinary paper printers, the digital revolution brought about by home computers might step into the realm of physical objects.[7]

Another important area where the networked information society might come to play a major role is in coining virtual money. Future currencies need not necessarily be created and administred by states. A brief text available here.

The claim presented in this text is not that technology will magically lead to a better world, but rather that technology does influence a given society. Depending on what use people make of these available technologies, they have different effects on a society. Computers and the internet provide for new models of information production which are, if realized, beneficial to individual freedom in liberal societies. However, these technologies could also be used to control the individual rather than empower it. DRM and Treacherous Computing as well as various efforts threatening privacy such as government-spying are dangers not to be understated.

If people choose to rely on proprietary information instead on sharing or if legislatures render sharing illegal or hinder peer-produced innovation for example by means of exclusive rights, the networking information society is weakened. Whether technology will be allowed to unfold its possibilities and the networked information society will become a widespread reality or whether these possibilities are turned down depends largely on the actions and decisions we are facing now. Today, we live in a critical time of technological and social change. We as a society now have the choice of using these technologies to a greater benefit or letting this moment of opportunity pass.