Introduction to the P2P Foundation Wiki Material about Commons Economics

On May 22-24, 2013, in Berlin, the Commons Strategies Group co-organized the Economics of the Commons Conference, focusing on commons-oriented economics, with the support of the Heinrich Boll Foundation and the Charles Leopold Mayer Foundation.

See: Overview of the Economics of the Commons Conference. To give you an idea of what type of people may or should attend, see our draft list of Commons-Oriented Economists.

A useful warning from Marco Berlinguer:

"A commons approach to economy implies a redefinition of what is economy, what is value and a radical re-discussion about the measures (and the structures of power) which are embedded in the capitalistic money codes. And therefore economists as such aren't sufficient to cover all the implications."

In preparation, three continental workshops were held in the autumn period of 2012, you can find information on those exchanges here:

Premises for a True Economics of the Commons

"To belie this tale of conservatism, several voices made themselves heard. Together they came to form another tradition of political economy, rooted in anthropological analysis, which featured some of the most sophisticated economists of modernity, such as Thorstein Veblen, Marcel Mauss, Karl Polanyi, and Rudolf Steiner. This new vanguard taught us to analyze economics from a vantage point that is the obverse of that of classical Liberal economics. Instead of considering economics, as the Liberals do, the problem of managing efficiently resources that are assumed to be scarce, the other school— let us call it “the political economy of the gift”—intimates that resources are not scarce but plentiful, and that the conundrum arising from such abundance (i.e., the surplus), is how best to employ this miraculous gift —the joint bounty of Nature and human ingenuity. "

"Let me go back to a common phrase "working in harmony with nature".

I will now extend it a little bit: "working in harmony with the nature of nature".

I will further modify that as follows: "working in harmony with the nature of things", where "nature" is one of those "things", the other being "non-living material goods", and the third being "non-material goods".

- "working in harmony with the nature of living goods"

- "working in harmony with the nature of non-living material goods"

- "working in harmony with the nature of non-material goods"

- "production methods in harmony with the nature of living goods"

- "production methods in harmony with the nature of non-material goods"

- "modes of sharing in harmony with the nature of living goods"

- "forms of ownership, control and access in harmony with the nature of living goods"

- "forms of ownership, control and access in harmony with the nature of non-living material goods"

- "forms of ownership, control and access in harmony with the nature of non-material goods"

Because living goods (agriculture) are qualitatively different from non-living material goods (industry), which are in turn different from non-materal goods (information), we can expect differences to show up also in the production methods, modes of sharing, and forms of ownership, control and access.

We ignore these differences at our own risk. Today the most common problem is the misapplication of the industrial paradigm in agriculture (mechanization; the whole agrochemical industry; genetic engineering) as well as its misapplication in the information sector (products of intellectual work as private property). But it may be equally disastrous to misapply policies for non-rivalrous goods to rivalrous goods. I think this was a factor in the collapse of the Eastern bloc." (adapted from Commoning mailing list, January 2011)

The potential role of the Crypto Economy for Commons Economics

* 3. Mechanisms, like tokens, that allow surplus value to be retained by the workers, not capital.

" Changes in the nature of work (precarization, casualization, subcontracting, the rise of the gig economy) see workers carrying greater risks and break down the attachment of work and living standards to employment. There is growing interest in alternative ways of organizing work." [5]

4. "the real potential is cryptocurrencies as units of account: as modes of measuring economic activity that are conceived differently from those intrinsic to fiat money. Fiat money has become tied to conventional framings of profit and loss, income and expenditure, and a market-centred calculus. Non-fiat monies have the potential for developing new ways to calculate economic activity; ways that represent different social and economic values, and measure performance by criteria other than profit. Think about it for a moment. The unit of account potential signals the importance of the crypto economy developing ways (not a singular way, but coin-specific ways) of accounting and measuring the activities supported by each token. We see this as central to giving tokens a material basis in the crypto economy; not just leaving them as speculative stores of value. .... "Exchange is often between parties of unequal power, so mutual gain cannot be presumed. An important issue of the crypto economy is how blockchain can and cannot countermand asymmetrical power in trade. We see blockchain not facilitating frictionless markets but rather frictionless capital: distributed capital." [6]

The historical pivot for the P2P Mode of Production

"We’re seeing something that is historically shocking—the reduction to zero of the cost of an especially valuable part of capital, which materializes directly knowledge (free software, free designs, etc.). And above all we see, almost day by day, how the optimum size of production, sector by sector, approaches or reaches the community dimension.

The possibility for the real community, the one based on interpersonal relationships and affections, to be an efficient productive unit is something radically new, and its potential to empower is far from having been developed. This means that we are lucky enough to live in a historical moment when it would seem that the whole history of technology, with all its social and political challenges, has coalesced to put us within reach of the possibility of developing ourselves in a new way and contributing autonomy to our community.

Today we have an opportunity that previous generations did not: to transform production into something done, and enjoyed, among peers. We can make work a time that is not walled off from life itself, which capitalism revealingly calls “time off.” That’s the ultimate meaning of producing in common today. That’s the immediate course of every emancipatory action. The starting point."

"In designing a truly symbiotic model for the preservation of future generations, we could benefit from the dynamism of a third stock: we humans. Indeed, it is the only one to develop and regenerate quickly: we will soon go from 7.6 billion to 10 billion people in the twenty-first century. Could this be good news rather than the scary perspective often described? We are not only abundant, but also available immediately in a new goal: to be in charge of the regeneration of our ecosystem. If we analyze it with a “circular” angle, this one also seems to generate all kinds of energies in a continuous way, namely renewed daily. In order to move away from the current resource-depleted model, we could consider the totality of stocks and flows available in the eco-systemic design of a positive future for all. And this, on the condition that these stocks and flows are based on a notion of renewed abundance in order to bring the level of resilience necessary to the systems on which we depend. In addition, we will need to understand them from an innovative angle allowing real optimization to meet the needs of future generations."

The virtuous cycle of collaboration

"Scarcity is primarily a mindset and lack of collaboration not a biophysical reality! Competition creates scarcity, which in turn is used to justify competitive behaviour (a vicious circle). The natural limits of bioproductivity and healthy ecosystems functions don’t create scarcity as such. Collaboration can turn these natural planetary limits into enabling constraints to create abundance for all within healthy ecosystems and a healthy biosphere. Collaboration creates shared abundance, which in turn invites more collaboration (a virtuous circle)." 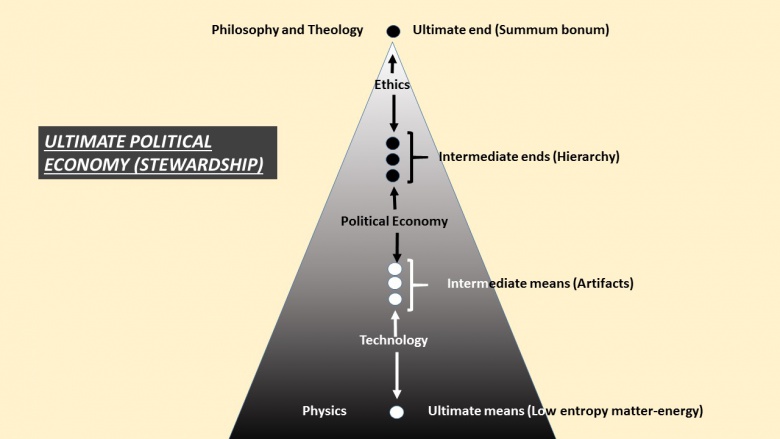 The Commons Economy as the evolutionary step ?

From the Presencing Institute:

From encommuns.org: Graph, part of Table for the Analysis of Commons Projects 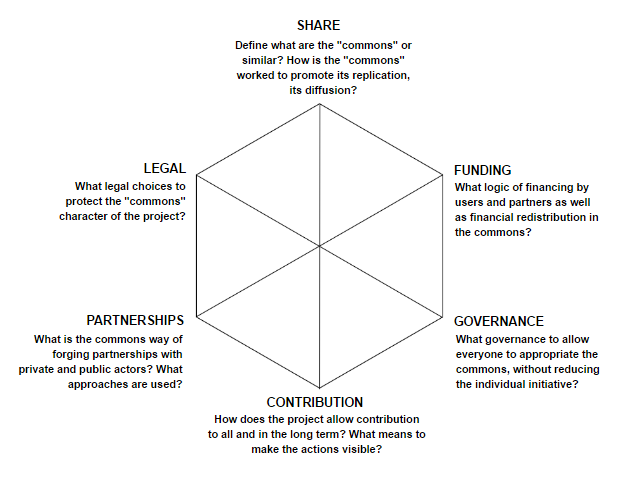 Nature as a Commons

Labour as a Commons

Money as a Commons

Articles on this wiki by Commons-Oriented Economists