WikiLeaks and the Age of Transparency 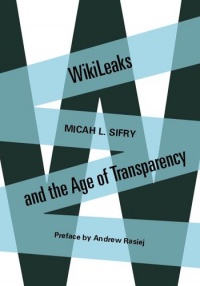 * Book: Micah Sifry. Wikileaks and the Age of Transparency. OR Books, 2011

"Micah Sifry's WikiLeaks and the Age of Transparency is a thoughtful and thought-provoking look at the promise and limits of Internet-based transparency efforts. Sifry looks at everything from digital sunshine laws to the Iranian election to Cablegate, and examines what has worked to make the world's governments and corporations more accountable and when technology-driven transparency efforts have failed. His postmortem on the Obama administration's largely abandoned transparency efforts are particularly sharp, especially in light of how much mileage the few successful government transparency projects delivered.

No book about transparency and politics would be complete without a look at Wikleaks and Julian Assange, and Sifry takes great pains to separate issues with Assange's personal life and management style from the power and danger of Wikileaks-style sites, as well as the power and risk of denial-of-service attacks like those staged under the Anonymous banner on Wikileaks' behalf.

This is more than an account of the successes and failures in online transparency: it's a kind of roadmap for activists who want to use the Web to make the powerful more accountable -- and who worry that technology might be used to hide a multitude of sins and cover them up with meaningless gestures towards transparency." (http://www.boingboing.net/2011/04/20/wikileaks-and-the-ag.html)