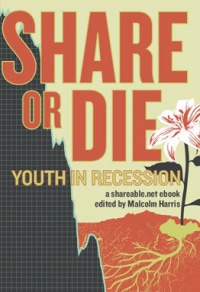 "Share or Die is the first collection of writing from Generation Y about post-college work and life in the 21st Century. A new economy based in collaboration rather than competition is growing, and young people are at the cutting edge. Unsatisfied with their parents' communities, 20-somethings are using technology to build an entire infrastructure of social entrepreneurship dedicated to using less and sharing more. Share or Die chronicles some of these projects and gives readers the tools they need to join this new economy." (http://trustcurrency.blogspot.com/2011/06/share-or-die-new-e-book-released.html)

"What happens when schools and universities train future professionals and contributors for a marketplace that is in flux--or doesn't exist at all?

Harris describes the context of the book well in the introduction. "If the traditional job market fails to accommodate so many young people, then the modes of living devised by and for our parents will remain impossible for us. I mean this both in terms of living lives centered on consumption, but also the physical habitats they’ve built. We will live closer to one another as we realize distance is not the same as safety. In order to survive and even have a chance to live, we will have to build communities of cooperation rather than competition. Learning to live together instead of merely in proximity to each other will be crucial." (http://www.fastcompany.com/1799188/share-or-die?)

"America stands at a precipice; limitless consumption, reckless economics, and disregard for the environment have put the country on a collision course with disaster. It's up to a younger generation to rebuild according to new forms of organization, and Share or Die is a collection of messages from the front lines.

From urban Detroit to central Amsterdam, and from worker co-operatives to nomadic communities, an astonishing variety of recent graduates and twenty-something experimenters are finding (and sharing) their own answers to negotiating the new economic order. Their visions of a shared future include:

As a call-to-action, "share or die" doesn't only refer to resource depletion, disappearing jobs, or stagnating wages. It refers to social death too, and to finding the common sense ideas and practices needed to not only merely survive, but to build a place where it's worth living. A series of forays into uncharted territory, this graphically rich collection of essays, narratives, and how-tos is an intimate guide to the new economic order and a must-read for anyone attempting to understand what it means to live as part of Generation Y.

Malcolm Harris is the Life/Art channel editor and a writer at Shareable and managing editor at The New Inquiry, a criticism site devoted to collecting and promoting the work of young, unaffiliated writers.

Neal Gorenflo is the co-founder and publisher of Shareable, a nonprofit online magazine about sharing."

"Jody Turner: Malcolm, how did you come to be involved with this book and why is this of topic of interest to you?

Malcolm Harris: I started working at Shareable.org in San Francisco about a year ago after graduating from the University of Maryland. In college I had done a lot of activism and writing around issues of student debt and educational accessibility, so when Neal Gorenflo, the founder of Shareable, came to me with the idea for the book, I knew it was a good one. We are in a generational turning point that is being felt around the world. It's a particularly fraught one, as we're beginning to see. It's a poignant moment of ecological and economic crisis, and young people are beginning to understand how much of the brunt we’ll bear. With that in mind, we assembled a group of incredibly strong writers and thinkers to address this poignant shift. Some were already friends, some acquaintances, and others strangers, but together they represent well the challenges for graduates today, while providing useful strategies and tactics for thriving in recession.

What are a few interesting teachings garnered from your involvement with the project?

Editing a collection like this is great because you get to see all the stories in context ahead of anyone else. There is a piece in the collection about being a nomadic journalist, and another from a young guy in Amsterdam who runs his apartment as a nomad-base. Together it’s a complete picture from both sides. Through reading this you will get to intimately know an inspiring group of people--almost all of them young, highly creative folk.

We've said from the jump that Share or Die is an experiment in both form and content. We brought together young designers and illustrators to give life to the interesting text, and it has taken off from there. It is amazing what a committed group today can produce with the tools available. The talent is out there, the passion is as well and with a little bit of organization and funding anything is possible.

Younger people are getting really good at conveying emotion through various new media, more easily developing professional relationships via virtual means. Will this only increase with the development and evolution of digital communication tools?

These days it's so easy to meet, work with and learn from a wide range of people from all over. It is also easy to stay in touch--even with people you've never met in person who are not even in your proximity. The quality of the engagement has been great, as a result people I have met through this project are connections I've held on to and will continue to hold on to over time.

The feedback on the ebook has been very strong. The P2P Foundation named Share or Die its book of the week and did a three-post series. Judging from comments and tweets and emails I've received, reader response is positive. It is leaning to an older demo also, which has been a surprise. The feedback has been so strong that we're working with a publisher now on an expanded print edition we are hoping to see in stores early next year. More is being added for this next iteration, we hope we keep seeing the same kind of enthusiasm among readers.

Since you know the content well, can you sum up the strategies from the book for our young readers here?

A recent piece in the Times discussed the difficult work-lives 20-something graduates are having today, which indicates that the mainstream media is starting to wake up to these realities. The question is, how young people are going to deal with these realities as they move into the work force and live in society? We need to realize what happened and act upon that knowledge.

But the current graduates are in an immediately bad spot, so in the book we show a new workforce attempting to become a part of the solution by solving their own problems. The essays we published provide frames for understanding what is happening and how to act on it. This includes how-tos on starting co-op housing and co-op businesses, a guide to collaborative consumption resources, cheap and easy seed-to-plate recipes, a peek inside the pack of a modern nomad, and instructions on how to find the best roommate.

In answering your question, I see the main strategy as increasing the density of communal living. This has a lot of different implications in practice, whether it’s the co-op businesses and homes I mentioned earlier, or the non-economic relations we establish with our friends, lovers, and family. It's not just a question of physical density, but of producing and using more resources in common. There's a big focus on do-it-yourself or DIY projects in the collection, but they should really be called do-it-ourselves projects; everything presumes we're going to have to be working together in a non-exploitative fashion. One good example is a piece in the collection about how to put on "stranger dinners," a potluck get together with people you don't know. It's not just about the food; it's about links and relations." (http://www.fastcompany.com/1799188/share-or-die?)