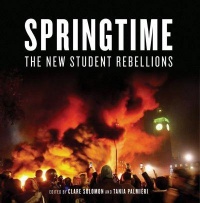 "The autumn and winter of 2010 saw an unprecedented wave of student protests across the UK, in response to the coalition government’s savage cuts in state funding for higher education, cuts which formed the basis for an ideological attack on the nature of education itself. Involving universities and schools, occupations, sit-ins and demonstrations, these protests spread with remarkable speed. Rather than a series of isolated incidents, they formed part of a growing movement that spans much of the Western world and is now spreading into North Africa. Ever since the Wall Street crash of 2008 there has been increasing social and political turbulence in the heartlands of capital.

From the US to Europe, students have been in the vanguard of protest against their governments’ harsh austerity measures. Tracing these worldwide protests, this new book explores how the protests spread and how they were organized, through the unprecedented use of social networking media such as Facebook and Twitter. It looks, too, at events on the ground, the demonstrations, and the police tactics: kettling, cavalry charges and violent assault.

From Athens to Rome, San Francisco to London and, most recently, Tunis, this new book looks at how the new student protests developed into a strong and challenging movement that demands another way to run the world. Consisting largely of the voices that participated in the struggle, Springtime will become an essential point of reference as the uprising continues." (http://www.versobooks.com/books/799-springtime)

"Dazed Digital: Firstly, tell us a little about the form this book takes? Clare Solomon: The book contains moments and memories of the recent student protests. We took an eclectic approach, bringing different generational and international points of view together. They reflect the diversity of the movement and the connections between them. New shoots of rebellion have grown from the roots of the past - together they weave their way through articles, letters, essays, analysis, images, video screenshots and other art.

DD: Were you worried about making what was quite a kinetic period of time into a book, something that is by its very nature a stationary object? Clare Solomon: All books are a snapshot of history in one-way or another. I hope Springtime will inspire others to reconsider how they perceive the student protests, or add alternative perspectives to get a deeper understanding. And, more than that, it is always necessary for us to record our own history as a 'taking note', as the Italian revolutionary Gramsci said, 'of actual events, seen as moments of a process of inner liberation and self-expression'. Otherwise we may only get to hear the voices of those in power. It is the self-expression of these new shoots that was most important for this book.

DD: Tell us about the role social media played. How you went about getting the immediacy of Twitter into a book? Clare Solomon: Twitter was crucial for co-ordination of the various forms of protest, so using the hashtags #solidarity and #demo2010 we searched for tweets that captured the spirit of the protests - from the NUS president's slightly understated 'looks like the biggest student demo for a generation' to the Met police's 'we would like to work with you' tweet and, more poignantly, the communique between parents and their kettled children. We wanted to demonstrate how we communicate and co-ordinate in the 21st century.

DD: A lot has been said about 'apathy'. Culturally/individually-what happened? Clare Solomon: Students can never get it right: one minute they're apathetic, the next 'they're always protesting about something'. The apathy is an effect of a supposedly democratic society which has stripped away any real possibility for engagement. A vote every four years is hardly the most enticing thing, especially when people feel that this vote is not listened to. Two million people marched against the Iraq war, many more millions now disagree with these wars: our governments do not listen to us. And then they want us to vote again for an increasingly similar selection of liars. No wonder people can't be arsed. And, on the other hand, the actions of the students have exposed the hypocrisy of our governments.

DD: Although Springtime has this particularly emancipatory swell of direction or purpose, we still have to deal with the possibility that things are going to get worse before they get better. What's next? Clare Solomon: No one can predict the future. But I bet things will get worse before getting better. The worse it gets, the more people will resist. We need to get across the argument that not one cut is necessary. They found money for war, so there's money to save our libraries and so on. What we need now is a mass movement of resistance to all the cuts.

Change is never brought by just a small group of militants. We need everyone: precarious workers and pensioners, unemployed and disabled people, single parents, civil servants and, of course, trade unions and so on. We shouldn't just be aiming for political change at the top but social change from below, for society to be run by us, for people and not for profit. Another world is possible, but only if we all organise for it. We will not put up with their lies and distortions anymore. We will continue to build resistance." (http://www.dazeddigital.com/artsandculture/article/10395/1/springtime-the-new-student-rebellions)

" students can strike back, although of course it is easier for college students than those younger. Springtime is largely, not entirely, about the United Kingdom and Europe at large, although California student uprisings are documented for school year 2009-10, and a stirring piece on Puerto Rico’s students offers an abundance of useful insights. Springtime is also formatted quite wonderfully, with student “documents” alongside commentaries, and a layout emphasizing the “feel” of the twenty-first century student radicals. Most especially new: the Book Bloc, padded posters with book and author names written on them, used by young people squaring off against police truncheons. Not new but exceptionally valuable—humor directed against the authorities, national and local.

What becomes clear is that campuses quiet since the 1970s have opened up again, with new waves of sit-ins coinciding naturally with the drastic increases in tuition and other moves to limit access to less-fortunate students, or to burden them with such heavy debts that they will work many years, perhaps decades, to get to ground zero.

What are the strategies and visions? These are more difficult to discern than in the rebellious 1960s, because most of the models or envisioned goals of a “liberated society” are now gone. In a way, of course, this is better: young people need to start outward from their own generation and their own lives, something not apparent in the shadow of the 1960s across campus activism for the last thirty or so years. In another way, it is daunting, because people need visions to make them willing to take chances, and visions of resistance, by themselves, are often not enough.

The best thing about Springtime is the pursuit of the subject: we see what is going on, what the actors think (or at least express in slogans), and where geographically things take place in Britain or Italy, for instance. We are left on our own, to some extent, to come to conclusions. Early days of the new revolt: we are all finding our way." (http://www.tikkun.org/nextgen/early-days-of-the-new-student-revolt)