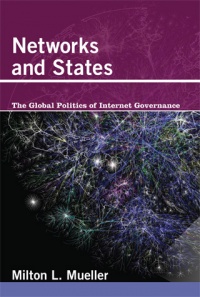 "When the prevailing system of governing divides the planet into mutually exclusive territorial monopolies of force, what institutions can govern the Internet, with its transnational scope, boundless scale, and distributed control? Given filtering-censorship by states and concerns over national cyber-security, it is often assumed that the Internet will inevitably be subordinated to the traditional system of nation-states. In Networks and States, Milton Mueller counters this, showing how Internet governance poses novel and fascinating governance issues that give rise to a global politics and new transnational institutions. Drawing on theories of networked governance, Mueller provides a broad overview of Internet governance from the formation of ICANN to the clash at the World Summit on the Information Society (WSIS), the formation of the Internet Governance Forum, the global assault on peer-to-peer file sharing and the rise of national-level Internet control and security concerns.

Mueller identifies four areas of conflict and coordination that are generating a global politics of Internet governance: intellectual property, cyber-security, content regulation, and the control of critical Internet resources (domain names and IP addresses). He investigates how recent theories about networked governance and peer production can be applied to the Internet, offers case studies that illustrate the Internet's unique governance problems, and charts the historical evolution of global Internet governance institutions, including the formation of a transnational policy network around the WSIS.

Internet governance has become a source of conflict in international relations. Networks and States explores the important role that emerging transnational institutions could play in fostering global governance of communication-information policy.

Milton L. Mueller is Professor at Syracuse University's School of Information Studies and XS4All Professor at Delft University of Technology, the Netherlands. He is the author of Ruling the Root: Internet Governance and the Taming of Cyberspace (MIT Press, 2002) and other books."

"Milton Mueller’s Networks and States isn’t the most important information technology policy book of the year, but it was easily my favorite. Mueller’s book continues his exploration of the forces shaping Internet policy across the globe. What Mueller is doing in his work in this book and elsewhere is becoming the early chronicler of the unfolding Internet governance scene. He meticulously reports on, and then deconstructs, ongoing governance developments along the cyber-frontier. He is, in effect, a sort of de Tocqueville for cyberspace; an outsider looking in and asking questions about what makes this new world tick. Fifty years from now, when historians look back on the opening era of Internet governance squabbles, Milton Mueller’s work will be among the first things they consult.

Mueller’s goal in Networks and States is two-fold and has both an empirical and normative element. First, he aims to extend his exploration of the actors and forces affecting Internet governance debates and then develop a framework and taxonomy to better map and understand these forces and actors. He does a wonderful job on that front, even though many Net governance issues can be incredibly boring. Mueller finds a way to make them far more interesting, especially by helping to familiarize the reader with the personalities and organizations that increasingly dominate these debates and the issues and principles that drive their actions or activism.

Mueller’s second goal in Networks and States is to breathe new life into the old cyber-libertarian philosophy that was more prevalent during the Net’s founding era but has lost favor today. Mueller says his “normative stance is rooted in the Internet’s early promise of unfettered and borderless global communication, and its largely accidental and temporary escape from traditional institutional mechanisms of control.” Mueller makes a convincing case for giving cyber-libertarianism, or what he calls “denationalized liberalism,” another chance; a chance that it really never had. “At its core,” Mueller continues, “denationalized liberalism favors a universal right to receive and impart information regardless of frontiers, and sees freedom to communicate and exchange information as fundamental and primary elements of human choice and political and social activity.” Moreover, “this ideology holds a presumption in favor of networked, associative relations over hierarchical relations as a mode of transnational governance,” he argues. “Governance should emerge primarily as a byproduct of many unilateral and bilateral decisions by its members to exchange or negotiate with other members (or refuse to do so).” Finally, he says, “a denationalized liberalism strives to make Internet users and suppliers an autonomous, global polity.” In essence, it’s about free will, freedom of action, and freedom of association. It’s essentially classical liberalism for the Information Age. Mueller admits that “such an ideology needs to answer tough questions about when hierarchical exercises of power are justified and through which instruments they are exercised.” But he continues on to make the case for “question[ing] the scope of national sovereignty over communications.” “The governance of the Internet needs to explicitly recognize and embrace the principle that there are limits to national sovereignty over the flow of information,” he says.

Mueller has made a beautiful case for cyber-libertarianism and he has given the movement its marching orders: “In short, we need to find ways to translate classical liberal rights and freedom into a governance framework suitable for the global Internet. There can be no cyberliberty without a political movement to define, defend, and institutionalize individual rights and freedoms on a transnational scale.” Even if you aren’t compelled to join the cause, however, I highly recommend you pick up Mueller’s Network and States, anyway. It’s a terrific survey of the current state of Internet governance and an important work of political science since it offers us a useful spectrum of Net governance viewpoints." (http://techliberation.com/2010/12/10/the-10-most-important-info-tech-policy-books-of-2010/)

"He's interested in the question of global Internet governance; "the problem of Internet governance has produced and will continue to produce institutional innovations in the global regulation of information and communications" (p.2). The Internet, he says, puts pressure on the nation-state in a number of ways:

Mueller sets about examining how "these factors are transforming national control and sovereignty over communication and information policy" (p.5). He overviews a set of literatures that address these changes:

Mueller finds these ideas useful, but approaches them critically (p.8), testing each to see what it can contribute to the question of global Internet governance.

Chapters 2 and 3 are some of the most valuable chapters for me, because here Mueller attempts a taxonomy of networks. "Network has become a trendy term," he acknowledges, and asks: "When we talk about 'networks' are we talking about technologies, or societal organizations, or both? Or are we simply projecting the latest metaphor into any and every kind of social relationship we can see?" (p.17). Mueller introduces three cases in Chapter 2, then uses these in Chapter 3 to separate and taxonomize two uses of "network" in the social sciences: a formal analytical technique ("network analysis") and a theory or metaphor of social organization (network as an organizational form) (p.31). These can interact powerfully, he argues (p.31), but "they need to be carefully differentiated and kept distinct" (p.32).

He first describes network analysis (p.32), and cautions us: "Note that this method finds 'networks' anywhere and everywhere. ... The fact that this analytical method can be pplied to anything does not mean that the world is more networked than it used to be, nor does it necessarily herald the existence of some new kind of society or organizational form" (p.33).

In contrast, the notion of network-as-organizational-form is "more complicated," developing out of many disciplines. Mueller further taxonomizes this understanding of network:

So, Mueller concludes, we see two distinct meanings of network in the social sciences: as "a loose but bounded and consciously constructed organization based mainly on leveraging the benefits of reciprocity" (i.e., "network organization"), and as "an unbounded and decentered cluster of actors around repeated patterns of exchange or contact" (i.e., "associative cluster") (p.41). Mueller describes two dividing lines between these: "Network organizations have a well-defined point of access and must explicitly decide on criteria for including and excluding participants. Associative clusters lack both features" (p.42). Network organizations are designed; associative clusters are de facto and relatively stable. Importantly, Mueller says, associative clusters have no agency: any "governance is a byproduct of many unilateral and bilateral decisions by its members to exchange or negotiate with other members" (p.42). To understand Internet governance, Mueller says, "we need both concepts of networks as a form of organization, but we must not confuse them" (p.43).

Mueller provides a nice table describing his taxonomy of networks and comparing them by specific features (p.44). He also examines how associational clusters might move toward network organization and then to hierarchies: conflict or negotiation over the distribution of benefits (p.46). He argues that

- "we can identify four ways in which the network organizations and associative clusters formed around the Internet might lead to institutional change:

1. By formalizing and institutionalizing the network relations themselves

2. By states' attempts to impose hierarchical regulation upon networked forms

3. By states' utilization and adoption of networked forms

4. By changing the polity; namely, by realigning and expanding the associative clusters around governance institutions" (p.46)

Moving on. In Chapter 4, Mueller deploys this network taxonomy to examine the UN's World Summit on the Information Society (WSIS), which represents "a clash between two models of global governance: one based on agreements among sovereign, territorial states; the other based on private contracting among transnational nonstate actors, but relying in some respects on the global hegemony of a single state" (p.55).

In Chapter 5, he describes how WSIS "experimented with efforts to make international organizations more open and democratic by facilitating the participation of nonstate actors," leading to the Internet Governance Forum (IGF) (p.81).

In Chapter 6, he examines the IGF in more detail, particularly its embrace of multistakeholderism (p.107).

And in Chapter 7, he examines the clash between two "IPs": intellectual property and Internet protocol (p.129).

Chapter 7 leads naturally into Chapter 8, about security governance. And although we may associate security with hierarchies, he argues, "the residues of hierarchy are becoming entirely dependent upon the network relationships of peer production to have any effect": Hierarchical actors must integrate into the "looser transjurisdictional, multistakeholder networks of operators" to do any work (p.173).

And that gets us to Chapter 9, Content Regulation. Here, Mueller argues that the Internet "took the libertarian principle of 'absence of prior restraint' and globalized it" (p.185). A critical challenge, he says, is "a concept of freedom better suited to the system of large-scale, automated content generation, interconnected autonomous systems, and highly differentiated layers of access characteristic of the global Internet" (p.189).

In Chapter 11, Mueller provides quadrants for understanding Internet polity. The axes are Transnational/National and Networking/Hierarchy; the quadrants are Denationalized Liberalism, Networked Nationalism, Global Governmentality, and Cyber-Reactionaries (p.256). And he argues that these quadrants can help us to understand what's going on right now. For instance, he says, "The nature of the political spectrum is profoundly changed when we are forced to make the territorial state a variable rather than a constant. ... The standard right-left spectrum does not provide reliable guidance on some of the basic institutional questions" (p.259).

He argues that a territorial, democratic nation-state "doesn't scale to global proportions" (p.268), and "the answer to that dilemma may lie in the upper-left quadrant of the political space - a denationalized liberalism" (p.269). (Dedicated readers of this blog - if there are any - may detect some resonance with Phillip Bobbitt's work.)

Overall, the book was fascinating." (http://spinuzzi.blogspot.com/2011/03/reading-networks-and-states.html)