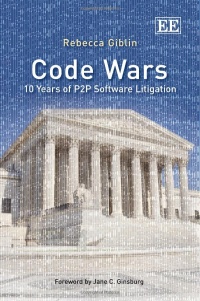 The content industry spent the better part of the last decade seeking to hold P2P software providers liable for the infringements of their users. Its emphatic victories against the providers of Napster, Aimster, Grokster, Morpheus and Kazaa led directly to a massive shakeout of large commercial file sharing software operators, and might have been expected to wipe out unfiltered P2P file sharing software production for good.

But a funny thing happened in the wake of all of these injunctions and shutdowns and settlements: the number of P2P file sharing apps available in the market exploded. By 2007, two years after the US Supreme Court decided Grokster, there were more individual P2P apps in the market than there had ever been before. The average number of users sharing files on P2P file sharing networks at any one time was nudging 10 million, and P2P traffic had grown, by some estimates, to comprise up to 90% of global internet traffic. At that point, content owners tacitly admitted defeat, largely abandoning their long term strategy of suing key P2P software providers, and diverting enforcement resources to alternatives like graduated response.

Code Wars tells the story of this decade-long struggle between content owners and P2P software providers. It traces the development of the fledgling technologies, the attempts to crush them through litigation and legislation, and the remarkable ways in which they evolved as their programmers sought ever more ingenious means to remain one step ahead of the law. In telling the complete legal and technological story of this fascinating era, the book focuses on answering the question that has baffled content owners for so long – why is it that, despite being ultimately successful in holding individual P2P software providers liable for their users’ infringement, their litigation strategy failed to bring about any meaningful reduction in the amount of P2P development and infringement? The book answers that question with a compelling new explanation that draws on the real differences between physical world and software based technologies – and takes readers on a rollicking ride along the way.

With reference to US, UK, Canadian and Australian secondary liability regimes, this insightful book develops a compelling new theory to explain why a decade of ostensibly successful litigation failed to reduce the number, variety or availability of P2P file sharing applications ╨ and highlights ways the law might need to change if it is to have any meaningful effect in future.

A genuine interdisciplinary study, spanning both the law and information technology fields, this book will appeal to intellectual property and technology academics and researchers internationally. Historians and sociologists studying this fascinating period, as well as undergraduate and graduate students who are working on research projects in related fields, will also find this book a stimulating read.

Rebecca Giblin, Lecturer, Monash University, Australia
With a combination of acute observation, close analysis and clear-headed honesty, Rebecca Giblin leads the reader to share her conclusion that there is no legislative, judicial, commercial or technical panacea for copyright infringement which P2P software facilitates, but that even now it is not too late to improve the manner in which the rights-owning and distribution sectors address the challenges that P2P poses.

Jeremy Phillips, Olswang, and Intellectual Property Institute, UK
Code Wars recounts the legal and technological history of the first decade of the P2P file sharing era, focusing on the innovative and anarchic ways in which P2P technologies evolved in response to decisions reached by courts with regard to their predecessors.

Contents: Foreword by Jane C. Ginsburg 1. Introduction 2. Applying the Pre-P2P Law to Napster 3. Targeted Attacks on the US Secondary Liability Law 4. The Targeted Response 5. Post-Grokster Fallout 6. Goldilocks and the Three Laws: Why Rights Holders Would Never Have Sued a P2P Provider under UK or Canadian Law (and why the Australian law was just right) 7. The End of the Road for Kazaa 8. Endgame: More P2P Software Providers than Ever Before 9. Can the Secondary Liability Law Respond to Code╒s Revolutionary Nature? Bibliography Index