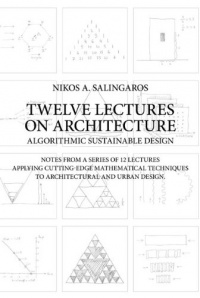 "Architecture and urbanism are formulated here as applications of computations. By applying cutting-edge mathematical techniques to architectural and urban design, a new toolbox is presented to design practitioners. Each step in the design process, on every scale, corresponds to a computation. This series of lectures brings together geometrical constructs such as Cellular Automata, recursive growth, the Fibonacci sequence, fractals, universal scaling, etc. Few of these topics are currently taught in architecture schools, nor are simple descriptions available for non-mathematicians. All of these disparate techniques are woven together into one useful design tool, which can be used by both architecture students and practitioners. The design methodology combines structural rules with a free design/computational method that liberates a designer from any previously held design dogma.

The work of Nikos Salingaros shines a light on the instinctive workings of every human’s internal architecture critic. His explanation of why certain buildings and places speak to our hearts illuminates much of our old assumptions about taste. With Nikos as our guide, we see through the invisibility of the emperor’s new clothes, and we laugh (or cry) all the harder at the joke played on mankind by modern architecture." (http://www.bod.de/index.php?id=296&objk_id=354912)

"The goal of permaculture is to reunite man with nature and man with man through design systems, and here patterns play an important role. Still, patterns can only reunite humans with natural systems and with each other, not with the geometry of the universe. Surely in what I like to call permatecture, better known as biophilic architecture, biotecture or neurotecture, patterns are crucial. But for the creation of wholeness and life we need a whole range of tools.

When “A Pattern Language” was first published in 1977, architects immediately assumed that it was a design manual, and used it to generate some very interesting buildings. Those buildings, despite their positive human qualities, lack an overall coherence, and people did not understand why this was happening. The reason is that the Patterns provide essential and necessary constraints, and not a design method in itself. The actual design algorithm was developed by Alexander, but only many years later. – Twelve Lectures on Architecture, by Nikos A. Salingaros, page 106

The new book by Professor Nikos A. Salingaros, Twelve Lectures on Architecture; Algorithmic Sustainable Design, is like a Swiss Army Knife of tools for creating ultimate human habitats, or EEAs. Nobody cares about something they don’t love, and nobody loves anything that contradicts nature, because the human biophilia is nature!

till, what Nikos has done is more like the work of an archaeologist, rediscovering old tools from the past, serving humanity through millennia. And he explains how to use these tools to rediscover the old form languages of our world, or even to create new form languages carrying the truth and poetry found in the form languages of all times. What do these thousands of form languages from throughout human history have in common? The answer is that they reflect the innate geometry of nature and that they don’t contradict the laws of physics.

This was the goal of human architecture, to become one with nature, to make our world whole! Until Le Corbusier and the realm of Modernism, when the nature of order got broken!

For those reading the groundbreaking Nature of Order — books by Christopher Alexander (I must admit I’ve not finished this series yet) — it must seem impossible that they can be compressed to a pocket book. And of course this is impossible, and Nikos’ book is somewhat larger than a pocket book too. Still, in a way it’s true. Twelve Lectures on Architecture is in many ways a compression of this work by Alexander. And this is both impressive and important — important for all those put off by the size and the long philosophical discussions of the Nature of Order books. For example, Alexander’s 15 properties of life cover a whole book in his work, while Nikos has “reduced” them to ten lofty pages. Here it’s just to grab the very essence and start using every tool immediately, creating new and life-generating design!

Every sustainable system consists of a fractal structure. In a tree these fractals are made up by visual patterns, while in a system design they consist of pattern languages. This is why in an agricultural pattern language the smallest farms should be more prevalent than larger farms, and again vegetable gardens (pattern 177) to be more prevalent than small farms. The same thing goes for an economical pattern language and so on. This way a fractal society creates life on every scale, where people can thrive and not feel lost (the human scale), like so many do today.

Modernism, on the contrary, is anti-fractalism! (No wonder why corporations have embraced their ideology.) For windows, for example, they claim that large panes lacking fractal properties help to bring nature into your house. The opposite is true! A fractal structure is strengthening the view, whether it consists of small panes or plants filling up your window. Alexander discovered this truth a long time ago!

Nikos A. Salingaros has studied a lot of buildings from all continents and times, and his conclusion is that there exists universal scaling or fractal hierarchy.

I’m giving out a challenge by claiming that the vast majority of buildings all around the world before the industrial age obey universal scaling (and actually continuing into early industrial years). This holds for all different cultures, all different periods, and is not restricted to a few carefully-selected buildings that I might refer to here. This claim can be documented by on-site measurements, and then the term “universal” becomes apparent, since it applies to indigenous architectures, both vernacular and monumental. Universal scaling is therefore innate to how human beings create forms, and is not a feature tied to any culture. – Twelve Lectures on Architecture, by Nikos A. Salingaros, page 25-26

To apply universal scaling to what we make Nikos has given us several tools, some very accurate but which take more time, and some more approximate but faster. They all come out with about 2,618, and are so related to the golden mean. Scaling coherence is essential, because all natural environments obey this law, and if we contradict it we contradict ourselves. It’s essential to pay extra attention to the human scale, ranging from two meters down to two millimeters. One of the many tragedies of modernists is that they are completely neglecting the human scale, regarding it as “clutter”. And even worse, their hero Le Corbusier even thought of children as “clutter”!

There are so many tools I should like to introduce for you from Nikos book, but as I don’t know how to draw I would have to copy the whole book for its illustrations. This is one of the strengths of the book, the many illustrations. I’m in no way an expert on how to use the tools of this book, and to become a master you need many years of practice. Using them was for generations a natural part of people’s cultural genetic code. We should be very grateful to Nikos for picking up the broken pieces, restoring them and giving them back to us. Sadly too many can’t admit that what we did over the last 100 years is fundamentally flawed, giving them cognitive dissonance.

This book by Nikos gives you a better perception of the world, both for what is ugly and what is beautiful. And while it can even break your heart when you realize the ugliness that modernism has created within it, you are more than compensated by gaining a new appreciation and acceptation of the innate beauty of our world." (http://permaliv.blogspot.com/2011/06/new-permatecture-toolbox-from-nikos.html)