A Revolution in the Making

A computer in every home. Every computer connected through the internet to every other computer. What sounds so simple is actually the setup for a revolution - one that has great implications on the economy as well as on society as a whole.

Devices like home computers and mobile phones continue to receive huge increases in computing power every year, following Moore's Law which predicts that the number of transistors on an integrated circuit would double every two years. People are thus holding the power to manipulate ever more data ever faster in their hands. Today, an ordinary personal computer is a general-purpose tool for such diverse tasks as simple word processing and Internet browsing, but also for designing detailed plans of houses or electronic circuits, or editing feature-length motion pictures - the possibilities are only limited by the software you run and your ability to learn how to use it. The free availability of powerful free and open source software with good documentation is thus very important.

The origins of the internet lie in a project of the United States Department of Defense which connected several universities. Today, the internet is a worldwide network and is itself the sum of smaller computer networks which are each operated by various companies such as service providers. They are interconnected through the lingua franca of computer networks: the TCP/IP-protocol. In its infancy mainly used for email and file transfer, the Internet took really off with the invention of the World Wide Web in 1989. Now it was possible to create formatted pages, interlink them with hyperlinks and instantly search them with search engines. The Internet thus very much resembles road networks. It is a publicly accessible infrastructure, provided by society as a whole, although the various parts are in different private and commercial hands. Nobody has the ultimate control over the Internet and its financing is largely independent of its function. 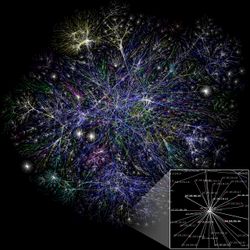 A visualization of the various routes through a part of the Internet.

...for a Revolution in the Making

What sounds so simple and has become almost ubiquitous in the more developed countries, is actually the setup for a revolution. These technologies enable individuals to do more for and by themselves, alone, or in loose collaboration with others.[1] How else could we explain the emergence of a situation where teenagers, sharing music over the Internet, are superior to the distribution channels of the recording industry? A situation where an online encyclopedia which every internet user can edit has become a serious competitor to the Encyclopedia Britannica in less than four years? A world in which nine out of ten computer users obtain the software to operate their machines from one single company, and in which at the same time a scene of enthusiast develop an alternative operating system which performs superior, and make it freely available to anybody?[2]

People all over the world try to use the new technologies to organize all human knowledge in a way which is both more efficient and more just. This development is transforming our society in fundamental ways. The very structures of how we communicated and how our economies worked for almost two centuries are changing.[3] Some established industries are becoming largely irrelevant and are being superseded by these new mechanisms which generally favour nonmarket production and individuals rather than a strong corporate world.[4] The industry is fighting these emerging mechanisms now and tries to use law and technology against them.[5] If they succeed in overpowering this digital revolution and use technology to control individuals rather than empower them, the revolution's many positive effects will be undone and transformed into their exact opposite. So a new kind of civil rights movement has arisen to defend the digital rights of individuals - rights that they often don't even know exist and that have backgrounds they yet have to be familiarised with.[6]

The case of software represents the most advanced example for application of these networked production mechanisms. Many later ideas in other domains have built upon the principles and philosophies developed by the free and open source software pioneers. That's why the story of the free software movement, the emergence of open source and the developments of GNU and Linux are described separately, in the first part of this text.

The second part consist of a short history of copyright, its implications on culture and the change of its scope with the emergence of digital technology. Networked information technology enables an entirely new economic model, making use of commons owned information and collaborating individuals, rather than large industries relying on exclusive rights, making information scarce against its nonrival nature, to produce many copies of the same homogenous information like the mass media did. Further-on, the implications of these developments on individuals and society as a whole are discussed.

The short third part lists what is needed for this networked information society to thrive and concludes with the statement that we are facing a choice today of whether to allow these mechanisms to flourish or squash them in favour of the old model of information production.