= book and concept by Kate Raworth, and associated policies

"The inner ring of her donut sets out the minimum we need to lead a good life, derived from the UN’s sustainable development goals and agreed by world leaders of every political stripe. It ranges from food and clean water to a certain level of housing, sanitation, energy, education, healthcare, gender equality, income and political voice. Anyone not attaining such minimum standards is living in the doughnut’s hole.

The outer ring of the doughnut, where the sprinkles go, represents the ecological ceiling drawn up by earth-system scientists. It highlights the boundaries across which human kind should not go to avoid damaging the climate, soils, oceans, the ozone layer, freshwater and abundant biodiversity.

Between the two rings is the good stuff: the dough, where everyone’s needs and that of the planet are being met." (https://www.theguardian.com/world/2020/apr/08/amsterdam-doughnut-model-mend-post-coronavirus-economy?)

"The doughnut approach, developed by economist Kate Raworth, suggests that the impact our production activities have on natural capital should remain within scientifically determined limits, both for how we extract and harvest, but also how we handle stocks and replenishment. Raworth describes natural capital limits as ceilings, building on the work of the Stockholm resilience center which identifies planetary boundaries for human activities. Social and human capital limits are floors. Here, performance of the production system must ensures no citizen is forced to endure a situation at the level of, or worse than, the floor. Hunger, homelessness, vulnerability to physical violence are examples of social “floors”.

A normative approach to doughnut metrics 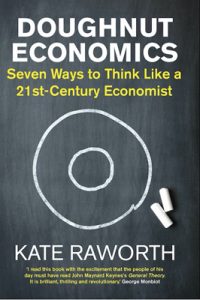 "Doughnut Economics proposes 7 fundamental shifts needed in today's economic mindset if we – humanity – want to give ourselves half a chance of thriving together on this living planet in the 21st century."

"Oxford Economist Kate Raworth popularized the idea of environmental and social thresholds by envisioning a doughnut: its outer edge represents “ecological ceilings” (i.e. Planetary Boundaries), or “do-not-exceed” limits of resource use beyond which natural systems start to collapse; its inner edge represents “social foundations,” below which societal systems start to founder." (https://medium.com/@ralphthurm/what-are-thresholds-allocations-and-why-are-they-necessary-for-sustainable-system-value-fe127483c407)

"Kate Raworth begins her book by reminding us of the “power of pictures”. She believes that generations of economists have been unable to escape the grip of neoclassical economics (despite its obvious failings) partly because they have been imprinted with the images in Paul Samuelson’s texts. Her solution is to imprint a new set of images that better correspond to the real world. Her first image is a “doughnut”, consisting of two concentric circles. The space in between them is the doughnut. The outer circle represents the ecological constraints within which any economy must operate if it is to be sustainable. The inner circle represents the minimum wealth that an economy must generate if its people are to enjoy an acceptable and equitable standard of living. A sustainable economy must sit within these constraints, hence doughnut economics. Outside the doughnut leads to ecological collapse – the hole in the centre leads to social collapse. Raworth identifies nine key ecological indicators (proposed by an international group of earth-system scientists) and 12 key social indicators (derived from the United Nations 2015 Sustainable Development Goals) to identify the bounds of the doughnut. In this sense, doughnut economics is based on science and on real-world data (as opposed to mathematics and unreal assumptions).

Another powerful image is Raworth’s more detailed presentation of the three concentric circles representing Earth, society and economy. Ecologists identify four fundamental ecosystem processes, water cycling, nutrient cycling, energy flows and species relationships. Raworth shows these processes entwining and penetrating the social and economic spheres. Note also that she identifies four “provisioning sectors” within an economy, the unpaid household sector (including for example, child-rearing – what use is a politician if he has not been toilet trained – but you can be sure his mother was not paid for it!), the commercial sector, the government sector, and the Commons. The Commons includes all wealth created by self-organizing groups. Consider, for example, the largest repository of information on the planet, Wikipedia. Note that money (financial flows) only appears in the smallest, inner-most layer of this diagram. GDP (measured in dollars) is no longer the paramount indicator of economic

"We cannot hope to address our predicament without a new worldview. We cannot use the models that caused our crises to solve them. We need to reframe the problem. This is what the most inspiring book published so far this year has done.

In Doughnut Economics: Seven Ways to Think Like a 21st-Century Economist, Kate Raworth of Oxford University’s Environmental Change Institute reminds us that economic growth was not, at first, intended to signify wellbeing. Simon Kuznets, who standardised the measurement of growth, warned: “The welfare of a nation can scarcely be inferred from a measure of national income.” Economic growth, he pointed out, measured only annual flow, rather than stocks of wealth and their distribution.

Raworth points out that economics in the 20th century “lost the desire to articulate its goals”. It aspired to be a science of human behaviour: a science based on a deeply flawed portrait of humanity. The dominant model – “rational economic man”, self-interested, isolated, calculating – says more about the nature of economists than it does about other humans. The loss of an explicit objective allowed the discipline to be captured by a proxy goal: endless growth.

The central image in mainstream economics is the circular flow diagram. It depicts a closed flow of income cycling between households, businesses, banks, government and trade, operating in a social and ecological vacuum. Energy, materials, the natural world, human society, power, the wealth we hold in common … all are missing from the model. The unpaid work of carers – principally women – is ignored, though no economy could function without them. Like rational economic man, this representation of economic activity bears little relationship to reality.

So Raworth begins by redrawing the economy. She embeds it in the Earth’s systems and in society, showing how it depends on the flow of materials and energy, and reminding us that we are more than just workers, consumers and owners of capital.

This recognition of inconvenient realities then leads to her breakthrough: a graphic representation of the world we want to create. Like all the best ideas, her doughnut model seems so simple and obvious that you wonder why you didn’t think of it yourself. But achieving this clarity and concision requires years of thought: a great decluttering of the myths and misrepresentations in which we have been schooled.

The diagram consists of two rings. The inner ring of the doughnut represents a sufficiency of the resources we need to lead a good life: food, clean water, housing, sanitation, energy, education, healthcare, democracy. Anyone living within that ring, in the hole in the middle of the doughnut, is in a state of deprivation. The outer ring of the doughnut consists of the Earth’s environmental limits, beyond which we inflict dangerous levels of climate change, ozone depletion, water pollution, loss of species and other assaults on the living world.

The area between the two rings – the doughnut itself – is the “ecologically safe and socially just space” in which humanity should strive to live. The purpose of economics should be to help us enter that space and stay there.

As well as describing a better world, this model allows us to see, in immediate and comprehensible terms, the state in which we now find ourselves. At the moment we transgress both lines. Billions of people still live in the hole in the middle. We have breached the outer boundary in several places.

An economics that helps us to live within the doughnut would seek to reduce inequalities in wealth and income. Wealth arising from the gifts of nature would be widely shared. Money, markets, taxation and public investment would be designed to conserve and regenerate resources rather than squander them. State-owned banks would invest in projects that transform our relationship with the living world, such as zero-carbon public transport and community energy schemes. New metrics would measure genuine prosperity, rather than the speed with which we degrade our long-term prospects.

Such proposals are familiar; but without a new framework of thought, piecemeal solutions are unlikely to succeed. By rethinking economics from first principles, Raworth allows us to integrate our specific propositions into a coherent programme, and then to measure the extent to which it is realised.

I see her as the John Maynard Keynes of the 21st century: by reframing the economy, she allows us to change our view of who we are, where we stand, and what we want to be.

Now we need to turn her ideas into policy." (https://www.theguardian.com/commentisfree/2017/apr/12/doughnut-growth-economics-book-economic-model)

The missing link with biophysical economics

"The problem with the doughnut is not so much understanding why it is shaped like a doughnut, but what it lacks. Look at the outer ring; you will see 10 sectors, all related to pollution: climate change, ocean acidification, chemical pollution, etc. Something is conspicuously missing and it is not a minor element of the overall picture. It is natural resources and, in particular, non-renewable resources.

Natural resources, their depletion, and the related concept of “overshoot” are not just missing from the doughnut, they go mostly unmentioned and unnoticed in the whole book. "
( http://www.resilience.org/stories/2017-06-30/doughnut-economics-a-step-forward-but-not-far-enough/ )

"the model will be formally embraced by the municipality of Amsterdam as the starting point for public policy decisions, the first city in the world to make such a commitment.

“I think it can help us overcome the effects of the crisis”, said Amsterdam’s deputy mayor, Marieke van Doorninck, who joined Raworth in an interview with the Guardian via Skype before the launch. “It might look strange that we are talking about the period after that but as a government we have to … It is to help us to not fall back on easy mechanisms.”

“When suddenly we have to care about climate, health, and jobs and housing and care and communities, is there a framework around that can help us with all of that?” Raworth says. “Yes there is, and it is ready to go.”

The central premise is simple: the goal of economic activity should be about meeting the core needs of all but within the means of the planet. The “doughnut” is a device to show what this means in practice.

Raworth scaled down the model to provide Amsterdam with a “city portrait” showing where basic needs are not being met and “planetary boundaries” overshot. It displays how the issues are interlinked.

“It is not just a hippy way at looking at the world,” says Van Doorninck, citing the housing crisis as an example.

Residents’ housing needs are increasingly not being satisfied, with almost 20% of city tenants unable to cover their basic needs after paying their rent, and just 12% of approximately 60,000 online applicants for social housing being successful.

One solution might be to build more homes but Amsterdam’s doughnut highlights that the area’s carbon dioxide emissions are 31% above 1990 levels. Imports of building materials, food and consumer products from outside the city boundaries contribute 62% of those total emissions.

Van Doorninck says the city plans to regulate to ensure builders use materials that are as often possible recycled and bio based, such as wood. But the doughnut approach also encourages policymakers to lift their eyes to the horizon.

“The fact that houses are too expensive is not only to do with too few being built. There is a lot of capital flowing around the world trying to find an investment, and right now real estate is seen as the best way to invest, so that drives up prices,” she says.

“The doughnut does not bring us the answers but a way of looking at it, so that we don’t keep on going on in the same structures as we used to.” (https://www.theguardian.com/world/2020/apr/08/amsterdam-doughnut-model-mend-post-coronavirus-economy?)