= an association of co-operatives that is the sole owner of all the assets of all constituent worker-owned firms.

"The “venture commune” — an association of co-operatives that is the sole owner of all the assets of all constituent worker-owned firms.

All land, buildings, capital etc. are rented by the co-ops from the venture commune. All members of co-ops are automatically members of the commune. Hence, the means of production are communally owned.

In theory this institution solves the problem of the highly unequal distribution of capital between worker-owned firms in a market economy.

"A Venture Commune is a joint stock corporation, much like its capitalist competitor, the Venture Capital Fund, however, it is designed as an anarcho-syndicalist revolutionary entity and therefore has three distinct properties.

Like a Venture Capital Fund, a Venture Commune invests in Enterprises in order to provide income for its shareholders. Both of them are essentially mutualization structures. However they embody fundamentally different concepts in how wealth should be shared and how capital should be controlled.

Ownership in a Venture Capital Fund is variable depending on how many shares one has purchased and every shareholder has a different share of the profits and different input into the decision making depending on the share position.

The second distinct property of a Venture Commune is that every shareholder is equal, one member one share, one share one vote.

Shares in a Venture Capital Fund are purchased with Money. Money is a debt instrument invented and controlled by the ruling elite. Money is used as store of value, whether that value was fairly acquired or stolen can not be determined. Therefore any investment system based upon money will propagate the injustices of the past into the future.

By eliminating the burden of enforcing the privilege of the elite, these three distinct properties combine to make the collective mesoeconomy of the Venture Communes and their enterprise far more productive, equitable and efficient than the competition. As a result Venture Communists will eventually buy the world from the Capitalists." (dead link: http://www.thetransitioner.org/wen/tiki-slideshow.php?page=Venture%20communism%20draft%20four&slide=3)

A proposal for 'venture communism'

"A Venture Commune is a joint stock corporation, much like the Venture Capital Funds of the Capitalist class, however it has four distinct properties which transform it into an effective vehicle for revolutionary workers' struggle.

1 A Share In The Venture Commune Can Only Be Acquired By Contributions Of Labour, and Not Property.

In other words only by working is ownership earned, not by contributing Land, Capital or even Money. Only Labour.

It is this contributed labour which represents the initial Investment capacity of the Commune.

The Commune Issues its own currency, based on the value of the labour pledges it has.

2 The Venture Commune's Return On Investment From Its Enterprises Is Derived From Rent and Not Income.

As condition of investment, the Enterprise agrees to not own its own property, neither Land nor Capital, but rather to rent Land and Capital from the Commune.

The Commune, unlike a Venture Capital Fund, never takes a share of the income of the Enterprise nor of any of its workers.

In this way Property is always owned Mutually by all the members of the Commune, however all workers and the Enterprises that employ them retain the entire product of their labour.

3 The Venture Commune Is Owned Equally By All Its Members.

Each member can have one share, and only one share. Thus although each worker is able to earn different prices for their labour from the Enterprises, based on the demand for their labour, each worker may never earn any more than one share in the ownership of the Commune itself, and therefore can never accumulate a disproportionate share of the proceeds of Property.

Ownership of Property can therefore never be concentrated in fewer and fewer hands and used to exploit the worker as in Capitalist corporations.

All Those Who Apply Their Labour To the Property of the Commune Must Be Eligible For Membership In The Commune.

The Commune may not refuse membership to any Labour employed by any of its enterprises that work with the Land and Capital controlled by the commune. In this way Commune members can not exploit outside wage earners, and the labour needs of the Enterprise will ensure that each Commune continues to grow and accept new members." 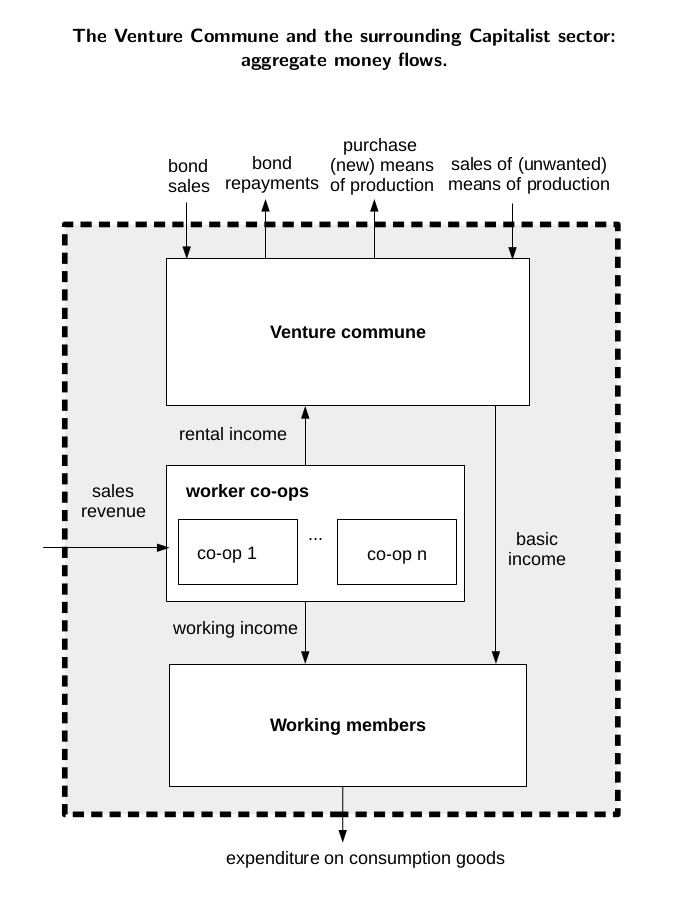 "I see venture communism in two initial phases, in the first phase proto-venture-communist enterprises must break the Iron law and then join together to found a venture commune.

In a mature venture commune, cost-recovery is simply achieved by using rent-sharing to efficiently allocate property to its most productive use, thereby ensuring mutual accumulation. Rent sharing works by renting the property for it's full market value to member enterprises and then distributing the proceeds of this rent equally among all commune members.

Investment, when required by exogenous exchange, is funded by selling bonds at auction. Endogenous liquidity is achieved through the use of mutual credit.

However in the initial phase there is no property to rent-share and the demand for the bonds is likely to be insufficient, thus the only way the enterprise can succeed is to break the iron law and somehow capitalize and earn more than subsistence costs, making mutual accumulation possible.

IMO, there are two requirements for breaking the iron law:

a) The enterprise must have highly skilled creative labour, so that the labour itself can capture scarcity rents, i.e. artists, software developers.

b) Production must be based on what I call "commodity capital," that is Capital that is a common input to most, if not all, industries, and therefore is often subsidized by public and private foundations and available on the market for below it's actual cost. Examples of this are telecommunications and transportation infrastructure, both of which have been heavily subsidized.

Also, a third requirement for me, although not implied by the simple economic logic, is that the initial products are of general use to market segments I believe are most directly agents for social change, i.e. other peer producers, activists, diasporic/translocal communities and the informal economy broadly.

Also, I would like to note that while the initial enterprises depend on complex labour and should focus on products of strategic benefit, a mature venture commune can incorporate all types of labour and provide all types of goods and services once the implementation of rent-sharing, bond-auction and mutual-credit is achieved." (Oekonux mailing list, January 2008)

"So, Dmytri Kleiner, “Venture Communist” – what does that mean?

Well, it’s sort of the name of a research project I started awhile ago. My background comes from the social justice movement of the 90s. I was part of some of the kinds of hacker groups that eventually became things like Indymedia, and stuff that we called technology affinity groups. At that time there was something going on called the dotcom boom, that you probably remember. A lot of us who were part of these hacker affinity groups supporting activist projects were working for these dotcoms.

As the social justice movement began to fade, along with the dotcom boom itself going into bust, it became very clear to me that this was very problematic. These truly liberating and revolutionary communication platforms were not going to be funded by capital. And so, if venture capital wasn’t going to fund them, then we needed some other way to fund them. This is where the term originates from. It originates from the simple aversion to venture capital. If venture capital won’t fund what we need to do, then we have to create venture communism. And so, venture communism itself began as a research project. And over time, there has been some development of the concept, but I usually mean the term in the very broad sense. I have my own proposals that you’ll find in the manifesto and other texts for what approaches to venture communism might look like, or what a venture communism may be like, but I also use the term in a very broad sense that could include other ways of collectively forming the communication capital that we need." (http://snuproject.wordpress.com/2014/03/16/venture-communism-and-technological-miscommunication-a-conversation-with-dmytri-kleiner/)

"MG: The Telekommunist Manifesto, proposes 'Venture Communism' as a new working model for peer production, saying that it "provides a structure for independent producers to share a common stock of productive assets, allowing forms of production formerly associated exclusively with the creation of immaterial value, such as free software, to be extended to the material sphere." Apart from the obvious language of appropriation, from 'Venture Capitalism' to 'Venture Communism'. How did this idea come about? DK: The appropriation of the term is where it started.

The idea came about from the realization that everything we were doing in the free culture, free software & free networks communities was sustainable only when it served the interests of Capital, and thus didn't have the emancipatory potential that myself and others saw in it. Capitalist financing meant that only capital could remain free, so free software was growing, but free culture was subject to a war on sharing and reuse, and free networks gave way to centralized platforms, censorship and surveillance. When I realized that this was due to the logic of profit capture, and precondition of Capital, I realized that an alternative was needed, a means of financing compatible with the emancipatory ideals that free communication held to me, a way of building communicative infrastructure that was born and could remain free. I called this idea Venture Communism and set out to try to understand how it might work.

MG: An effective vehicle for the revolutionary workers’ struggle. There is also the proposition of a 'Venture Commune', as a firm. How would this work?

DK: The venture commune would work like a venture capital fund, financing commons-based ventures. The role of the commune is to allocate scarce property just like a network distributes immaterial property. It acquires funds by issuing securitized debt, like bonds, and acquires productive assets, making them available for rent to the enterprises it owns. The workers of the enterprises are themselves owners of the commune, and the collected rent is split evenly among them, this is in addition to whatever remuneration they receive for work with the enterprises.

This is just a sketch, and I don't claim that the Venture Communist model is finished, or that even the ideas that I have about it now are final, it is an ongoing project and to the degree that it has any future, it will certainly evolve as it encounters reality, not to mention other people's ideas and innovations.

The central point is that such a model is needed, the implementation details that I propose are... well, proposals.

MG: So, with the combination of free software, free code, Copyleft and Copyfarleft licenses, through peer production, does the collective or co-operative have ownership, like shares in a company?

DK: The model I currently support is that a commune owns many enterprises, each independent, so the commune would own 100% of the shares in each enterprise. The workers of the enterprises would themselves own the commune, so there would be shares in the commune, and each owner would have exactly one." (http://www.furtherfield.org/features/interviews/interview-dmytri-kleiner-authour-telekommunist-manifesto)

"Venture communists promote the ideal of workers owning their own means of production, to learn more about the theoretical, practical and philosophical implications of this mode of production, we invite you to explore these resources: