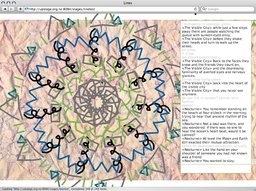 make-shift by Paula Crutchlow (UK) and Helen Varley Jamieson (NZ/Germany), premiered on 5 December 2010, simultaneously in the UK, Italy and online, screengrab from a recording by Francesco Buonaiuto 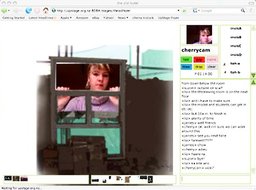 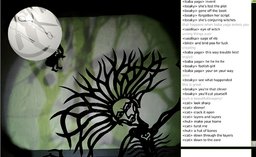 Avatar Body Collision is a performance troupe incorporating its virtual and physical presences into globally-distributed 'cyberformances'. This is where one performer is live in front of an audience while others are located on another continent, participating virtually via the web.

To develop this unique practice Avatar Body Collision created the open source platform UpStage. UpStage offers people a virtual theatre within which they can perform in real-time, mixing digital media such as photographs, drawings, animation, text, audio and web cam footage - there is even a text-to speech tool adding a verbal element too.

Live performance is made accessible via a browser-friendly format; an archive of videos and tutorials demonstrate the scope of the tool for newcomers. Performances often reflect upon the nature of performativity and human connectivity in a networked world, often drawing our attention to the awkward and glitchy aspects of computer-mediated communication.

If all the world's a stage, then all the online world's a theatre and open source performance tools offer us a unique backstage pass.

There have been many more cyberformances created in UpStage - visit the UpStage website for further information. Anyone interested in the development side of the project can visit the sourceforge site for the project to find out more.


As part of the Furtherfield collection commissioned by Arts Council England for Thinking Digital. 2011