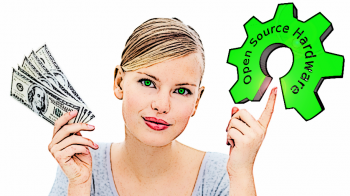 With the maturation of digital manufacturing technologies like 3-D printing, a new paradigm is emerging of distributed manufacturing in both scientific equipment and consumer goods. Hardware released under free licenses is known as free and open source hardware (FOSH). The availability of these FOSH designs has a large value to those with access to digital manufacturing methods and particularly for scientists with needs for highly-customized low-volume production products. It is challenging to use traditional funding models to support the necessary investment of resources in FOSH development because of the difficulty in quantifying the value of the result. In order to overcome that challenge and harvest the current opportunity in both low-cost scientific equipment and consumer products, this article evaluates the following methods to quantify the value of FOSH design including: 1) downloaded substitution valuation; 2) avoided reproduction valuation and 3) market savings valuation along with additional benefits related to market expansion, scientific innovation acceleration, educational enhancement and medical care improvement. The strengths and weaknesses of these methods are analyzed and the results show that the methods are relatively straight-forward to institute, based on reliable freely-available data, and that they minimize assumptions. A case study of a syringe pump with numerous scientific and medical applications is presented. The results found millions of dollars of economic value from a relatively simple scientific device being released under open-licenses representing orders of magnitude increase in value from conventional proprietary development. The inescapable conclusion of this study is that FOSH development should be funded by organizations interested in maximizing return on public investments particularly in technologies associated with science, medicine and education.

The two primary methods of determining the value of FOSH design are shown below- full details are provided in the paper.

Where Cp is the cost to purchase a traditionally manufactured product, Cf is the marginal cost to fabricate it digitally using a distributed technique, P is the percent of downloads resulting in a product, and ND(t) is the number of times the digital design has been downloaded at time t. P is subject to error as downloading a design does not indicate that it was manufactured and a single download from a distribution website could be fabricated many times, traded via email, memory stick or posted on P2P sites that are not recorded. The savings from FOSH digital manufacturing (S=Cp-Cf) have been shown to be substantial in the developing world for appropriate technology and for consumer goods. S is maximized for custom low-volume products such as scientific equipment where Cf is generally only 1-10% of Cp (see the Open Source Lab).

A variation of the downloaded valuation is the avoided cost of reproduction value VR for a single company, which is given by:

where h is the number of design hours needed to replicate the product and w is the hourly wage of the workers needed to produce the replication. This method of capturing value can also be extrapolated to all firms (and individuals that would hire firms or freelance designers to complete the design) to obtain the total value to society and is give in detail in the paper.