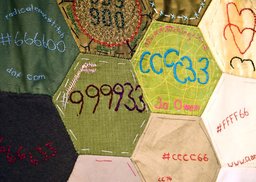 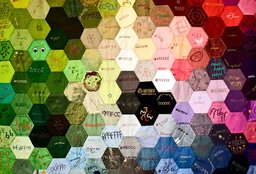 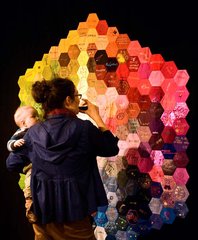 The Open Source Embroidery project run by Ele Carpenter "brings together programming for embroidery and computing. It's based on the common characteristics of needlework crafts and open source computer programming: gendered obsessive attention to detail; shared social process of development; and a transparency of process and product." (http://speakdiapsalmata.blogspot.com/2008/05/open-source-embroidery-interview-with.html)

The way women traditionally share needlecraft techniques compares to the manner in which computer coding skills are circulated - largely by men. Both are inherently open source activities, but while we have at least some idea of what's involved in sewing, for many, coding remains shrouded in mystery.

Based around needle and thread, rather than screen and keyboard, artist-curator Ele Carpenter has established an itinerant sewing circle to literally and metaphorically thread its way through the seams of craft and code.

To date, the global participants of Open Source Embroidery projects (which range from events to exhibitions and workshops) have built systems for successfully sharing all sorts of crafting and coding skills as part of the same learning fabric.

"Embroidery is constructed (mostly by women) in hundreds of tiny stitches which are visible on the front of the fabric. The system of the stitches is revealed on the back of the material. Some embrioderers seal the back of the fabric, preventing others from seeing the underlying structure of the pattern. Others leave the back open for those who want to take a peek. A few integrate the backend process into the front of the fabric. The patterns are shared amongst friends in knitting and embroidery 'ciricles'.

Software is constructed (mostly by men) in hundreds of tiny pieces of code, which form the hidden structure of the programme or interface. Open Source software allows you to look at the back of the fabric, and understand the structure of your software, modify it and distribute it. The code is shared amongst friends through online networks. However the stitches or code only make sense to those who are familiar with the language or patterns." (http://speakdiapsalmata.blogspot.com/2008/05/open-source-embroidery-interview-with.html)

'Html Patchwork', now on show at the National Museum of Computing comprises hexagonal patches each representing a hexadecimal colour code. Its online counterpart Patchwiki - a wiki designed to manage the collaborative aspect of the work - resembles a virtual patchwork of crafting and coding techniques.

Another project, A Concise Lexicon of/for the Digital Commons, a poetic examination of the language of a digital commons (the principle of access-all-areas knowledge) is being meticulously materialised; an exercise in close-reading as close-stitching.