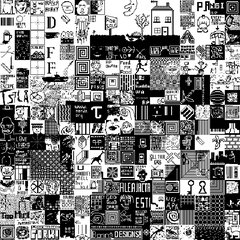 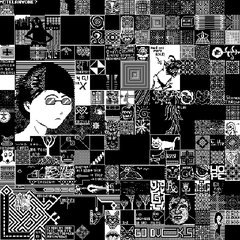 
Andy's Deck's Glyphiti is an artistic experiment in extending the reaches of public art. Converting the clandestine creativity of the graffiti artist into something more openly available, Deck developed a globally accessible drawing wall. Built of editable 'glyphs' - squares simultaneously reminiscent of hieroglyphics, bricks and pixels - the wall can be drawn on by anyone at any time with any level of skill.

Even though participants are likely to be working alone (like any good graffiti artist surely should) perhaps on their home computer, in actual fact they are anonymous but collaborative artists working on a constantly evolving public artwork. Continuing with the graffiti metaphor, Glyphiti can permeate most corporate firewalls reminding us how adept graffiti artists are at accessing tricky spaces, as well as of the way graffiti turns private structures into very public visuals.

Though Deck records the mutating mural neither he nor any participant can ever take ownership of it, again expanding the territory of public art projects. And the platform itself is open source, meaning that not only can anyone be the creator of Glyphiti-based artworks, but also of their own Glyphiti-related art spaces.
http://artcontext.org/glyphiti/

As part of the Furtherfield collection commissioned by Arts Council England for Thinking Digital. 2011