The 6 points defining what a Common Company is

1. It is a commercial company having 2 divisions of shares, namely: the Common and the Private;

2. The proration of shares in its Common division is defined by its Decentralizing property (the d), but only when d is nonzero smaller or equal one (0 < d <= 1) and as d may be set, or reset form zero, but only once in the lifetime of the company, otherwise, when d is zero or reset more then once, then the company is a Private and not a Common one. Hence the d alone defines any company as either Private or Common one;

4. Each of its common shareholders has equal number of shares and is either a person or a Common Company. Hence a private company can never be a common shareholder in a Common company, but the other way around is possible. This establishes the asymmetric property of the Common companies versus the Private ones in general, for protecting the motion of the notion of decentralizing in the market as a whole;

5. Its total reflected value (the t), being the value of all the shares in the company, is always calculated such that t * d = v * c, where 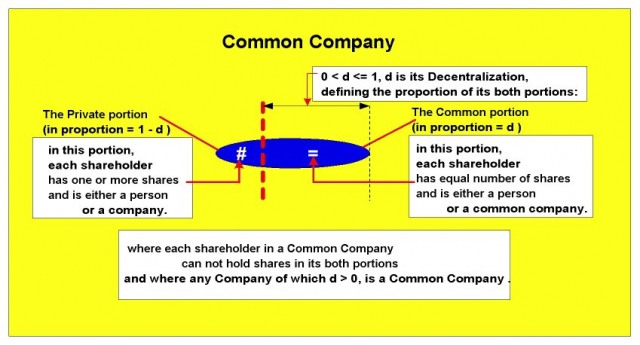