Introduction to the P2P Foundation Wiki Material about the Commons

= What we share. Creations of both nature and society that belong to all of us equally, and should be maintained for future generations. The Commons has the potential to replace the commodity as the determining form of re-/producing societal living conditions. Such a replacement can only occur, if communities constitute themselves for every aspect of life, in order to take „their“ commons back and to reintegrate them into a new need-focused logic of re-/production. [1]

This new section exclusively devoted to the emergence of Commons in various fields.

"Our global economic system is now in grave crisis, threatening the entire planet, its institutions and species.

A new kind of common wealth is needed to protect the assets of Earth, resolve our private and public debts, and create a global society of justice, sharing and sustainability for everyone.

Our commons are the collective heritage of humanity — the shared resources of nature and society that we inherit, create and use. People across the world are now rediscovering these common goods and choosing to protect them for future generations.

Whether our commons are traditional (rivers, forests, indigenous cultures) or emerging (solar energy, intellectual property, internet), communities are managing them through unique forms of self-governance, collaboration and collective action. And in working together to preserve these resources, we are generating new standards of responsibility, mutual aid and sustenance for all beings.

Global Commons Trust promotes the creation of trusteeships, where the rights to our commons may be realized for the benefit of all." (http://globalcommonstrust.org/) 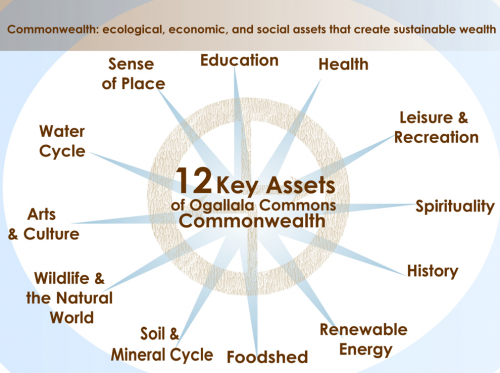 2. Sam Rose and Paul Hartzog offer the following typology for Commons based on different distributed infrastructures:

"James Greyson [4] proposes Seven Policy Switches and associated strategic commons to achieve a rapid reversal or multiple global problems. "Together the switches define a practical strategy for global security, for a serious attempt at revival of co-operation, ecosystems and prosperity." [5]

"Where people work together to both share those resources that are shareable now (software, designs, knowledge, waste that can be used as food, surplus capacities and resources) and cooperate to produce items that are still based in scarcity, then re-invest the profits into creating more and more abundance-economy-based systems."

"As neoliberalism converts every political or social problem into market terms, it converts them to individual problems with market solutions. Examples in the United States are legion: bottled water as a response to contamination of the water table; private schools, charter schools, and voucher systems as a response to the collapse of quality public education; anti-theft devices, private security guards, and gated communities (and nations) as a response to the production of a throwaway class and intensifying economic inequality; boutique medicine as a response to crumbling health care provision; “V-chips” as a response to the explosion of violent and pornographic material on every type of household screen; ergonomic tools and technologies as a response to the work conditions of information capitalism; and, of course, finely differentiated and titrated pharmaceutical antidepressants as a response to lives of meaninglessness or despair amidst wealth and freedom. This conversion of socially, economically, and politically produced problems into consumer items depoliticizes what has been historically produced, and it especially depoliticizes capitalism itself. Moreover, as neoliberal political rationality devolves both political problems and solutions from public to private, it further dissipates political or public life: the project of navigating the social becomes entirely one of discerning, affording, and procuring a personal solution to every socially produced problem. This is depoliticization on an unprecedented level: the economy is tailored to it, citizenship is organized by it, the media are dominated by it, and the political rationality of neoliberalism frames and endorses it.”