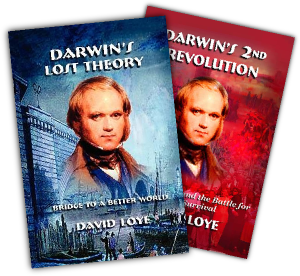 "When most people think of evolution, the first thing that comes to mind is either survival of the fittest or selfish genes. Yet the psychologist and system theorist David Loye argues this is a misreading of the gist of evolutionary theory and the intent of that theory’s founder. Moreover, misreading Charles Darwin has severe social consequences: it fosters the belief that the worst side of humanity is bound to win.

Darwin’s ultimate interest, Loye argues, was in the evolution of human moral sensitivity. He adds that Darwin’s celebrated principle of natural selection was just the first stage on the way to moral development. Loye founded the Darwin Project, with a council of over sixty natural and social scientists, to promote the view that moral development is at the heart of evolution.

The two books reviewed here lack the “polish” of mainstream books: the printing is not easy on the eyes, and there are significant spelling errors. Yet the surface “roughness” of these books conceals the fact that they bear messages found, to my knowledge, nowhere else. The books are a must-read for anyone interested in reconciling science and spirit. They are also guideposts for tracing the origins of our society’s prevailing ethos of selfishness and replacing that with an ethos of caring.

Darwin’s Lost Theory details Darwin’s view of moral development, mainly from the 1871 book Descent of Man (with its unfortunate sexist title) and some unpublished notebooks. It explores connections Darwin drew between moral development and natural selection, the central theory of Darwin’s more widely read Origin of Species (1858). Darwin’s 2nd Revolution details the history of evolutionary theory after Darwin’s death. It traces the work of scholars who distorted the theory into a message of endless competition and ultimate meaninglessness, and the opposing work of other scholars who synthesized evolution with cooperation and meaning." (http://www.tikkun.org/nextgen/the-evolutionary-roots-of-morality)