Difference between revisions of "Category:Business"

(this section is under construction, will be finalized soon) 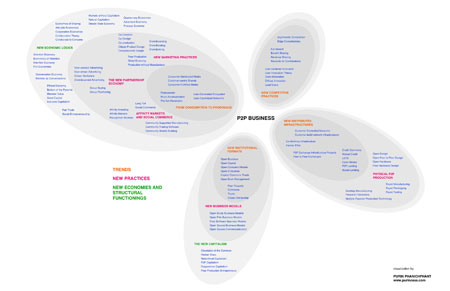 A map with a conceptual overview of the peer to peer business space. Every concept in the map is searchable via our wiki search box on the left.

Competing 'on top' of the Commons

"One of the best ways to stimulate competition, innovation and lower prices is for participants in a market to honor the commons (a shared pool of resources, a minimal set of safety or performance standards) and then to compete "on top" of the commons. Instead of being able to reap easy profits from monopoly control over something everyone needs -- say, a computer operating system like Windows -- a company must work harder to "add value" in more specialized ways." (http://onthecommons.org/node/1196)

The Sharing Economy should be distinguished from the Monetary Economy

"... the quest for self-determination and meaningful and memorable experiences ultimately will hinge on people's understanding that they are not merely consuming a product, but that they are actually participating in a meaningful social process not guided by an extrinsic logic (profit), something that rather has intrinsic, or 'sovereign' value. I don't believe that these two can be fused into one

"The philosophy that undergirds exchange also contrasts sharply across forms. In markets the standard strategy is to drive the hardest possible bargain in the immediate exchange. In networks, the preferred option is often one of creating indebtedness and reliance over the long haul. Each approach thus devalues the other: prosperous market traders would be viewed as petty and untrustworthy shysters in networks, while successful participants in networks who carried those practices into competitive markets would be viewed as foolish and naive... In a market context, it is clear to everyone concerned when a debt has been discharged, but such matters and not nearly as obvious in networks."

"Money is a very important and useful medium of exchange for high-value, tangible products. For small-value, intangible products, the costs tend to exceed the value of the transactions—especially when you add in the overhead associated with making payments at a distance. Fortunately, human beings are clever. We’ve begun to find a variety of substitutes for money that work better."

Social Commerce and the Intention Economy

"only 13% of consumers say they buy products because of their ads. Contrast that to 60% of small business owners in North America that say they use peer recommendations to make their buying decisions and over 70% of 18-35 year olds who report the same for their media purchases."