Difference between revisions of "Integration as scientific method"

The title of this page could also be: A scientific method for philosophy, psychology, sociology and other Alpha Sciences or Plausible Science

It has become a tradition to consider the exact physical experimental scientific method, including experiments, mathematical deductions and falsification as some of its core ingredients, as the only reliable paradigm to check the validity of scientific hypotheses. The fact that some very important sciences, indispensable to take decisions in daily life, i.e. the so called Alpha Sciences (philosophy, psychology, sociology, art, economics, religion, politics, etc.), were inaccessible for this method, didn't bother too much science philosophers. "Just wait till we discover some exact tools to measure those phenomena. It's just a question of time." This promise is now repeated since nearly three centuries, and still the alpha sciences remain in the realm of unscientific, uncontrollable, irrational, mythical, obscure, implausible thinking, where the number of theories equals the number of theorists.

This article proposes a novel approach, considering that classical science is only one of at least two methods to control the plausibility and reliability of scientific hypotheses. The second method is described. Some historical research yields evidence that this method in fact exists since a long time, from the Renaissance scientists to Kant and Whitehead, and that it even "invented" the modern scientific method. And, most probably, the brain itself functions that way.

Confronted with life's experiences, man constantly tries to "understand" things happening around him: which factors contribute to it, to which extend they do so, and how these factors could be influenced to achieve our goals? Even at brain level, spontaneous abstractions and analogies are elaborated, and hypotheses are induced, at different levels of abstraction.

The fundamental question is: how can we be sure that these hypotheses, on which we trust to take action, are reliable, plausible, "exact"? This is the purpose of science: to control the spontaneously induced hypotheses.

Science is an intellectual method to control, i.e. to prove or to falsify, hypotheses that where spontaneously formulated by a subconscious and spontaneous process, called induction.

It is important to note that, up to now, all the hypotheses, including these that made exact science so useful and impressive, were spontaneous and subconscious, i.e. highly uncontrollable and largely unpredictable. Even Einstein could not explain how he "discovered" his creative theories.

Exact science is a scientific method where the validity of a hypothesis is controlled or falsified (i.e. proved or refuted) by making the controllable steps of thinking as reliable as possible:

One could say that exact science controls the deduction.

Plausible science is a scientific method where the validity (plausibility) of a hypothesis is controlled by making induction more plausible and controllable, i.e. as reliable as possible

One could say that plausible science controls the induction.

The procedure of Plausible Science

Differences between exact and plausible science

One could perhaps consider that those "primitive", "unscientific" forms of thinking, from ancient Egypt and Babylon through Greece and Alexandria, were in fact kinds of intuitive integrative thinking. The most important condition for integrative thinking, i.e. a general knowledge of multiple fields of human experience, was fulfilled. The ancient philosophers, unless nowadays scientists, appeared to be experienced in many diverse "sciences", ranging from mathematics to architecture and the art of war making, from music to medicine, passing through law, politics and astronomy, all in one person. The notion of homo universalis,[1] i.e. someone who knows "everything", was a high ranking qualification until the 17th and even the 18th century. Blaise Pascal (1623-62) is reknown as the "last" homo universalis.

Pierre Teilhard de Chardin and Alfred North Whitehead strongly advocated diversified backgrounds and inspiration fields. Teilhard, the theologist who became scientific paleontologist and philosopher, and Whitehead, the mathematician who became philosopher (the first lesson of philosophy he attended was the one given by himself). They can be seen as modern homines universales.

Also Ken Wilber, with his concept of Integral Thinking, comes close to integrative science, although he just creates an "integral context", enabling integrative thinking by approaching reality from 4 viewpoints (interior/exterior, individual/social) without introducing the integration procedure.

One of the most frustrating and nevertheless exciting facts about the brain, is that it doesn't work as we logically suppose. Already the "phrenological theory" which supposed that the brain cortex had feelings and idea types. Next naive image became famous 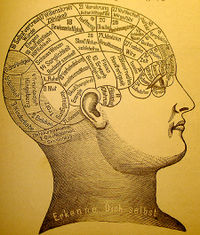 But even a century later, the most intellectual functions were unable to be located. Even functions, considered important and essential, including memory, will, calculator, imagination, escaped to every tentative location. It is obvious that the brain uses different functional and logical categories than we can imagine, and that we have described in logic and computer science.

The riches of the brain is its ability to make associations, i.e. putting concepts together that aren't identical. Strictly speaking, associations and abstract categories holding non-identical but similar images and concepts, are forms of erroneous thinking. So is the spontaneous generation of hypotheses: a vague analogy with causal links we already know.

To compensate these inaccuracies, the brain constantly uses a it firmly possesses: making still more associations, as vague as the former. In fact, every observation and problem to resolve induces a number of possible interpretations. These are then compared, and the most plausible common aspects are considered as the most probable. All this in a fraction of a second.

As this analogy suggests:

Test your brain: try to calculate by heart 678 * 789. I suppose this is nearly impossible for your brain. But if I say you that the answer is 0.1 or 567.890.123 you will immediately reply that my suggestions are silly. May I ask you, why are you so presumptuous to refute my suggestions, if you even don't know the right answer yourself? The explanation is simple: your brain, totally unable to make relatively simple calculations (therefore you had to memorize as a little child the results of calculations with numbers from 1 to 10), is very good in making, in fractions of seconds, a multitude of associations, and compare them, culminating in a rather impressive approximation of the good result.

These considerations are very suggestive that the brain doesn't function with exact scientific data, but with rather vague associations pointing together towards the most plausible answer.